The highly anticipated Legacy of the Sith DLC for the MMORPG Star Wars: The Old Republic turned out to be a huge disappointment. The issues is mostly its length.

The length of the DLC

Many people are reporting that the main storyline of the DLC can be completed in just 2-3 hours. This would be acceptable for a small DLC. Legacy of the Sith, however, was advertised as a huge expansion, so fans have the right to feel disappointed.

The expansion raises the maximum level cap to 80, which can be achieved in the middle of the DLC's main storyline.

Changes in the interface

The DLC has also changed the interface. New, minimalistic and black and white icons are not to everyone's liking. There is no shortage of opinions that the older (colored) icons were not only prettier, but also easier to recognize. Some texts have also become less clear. 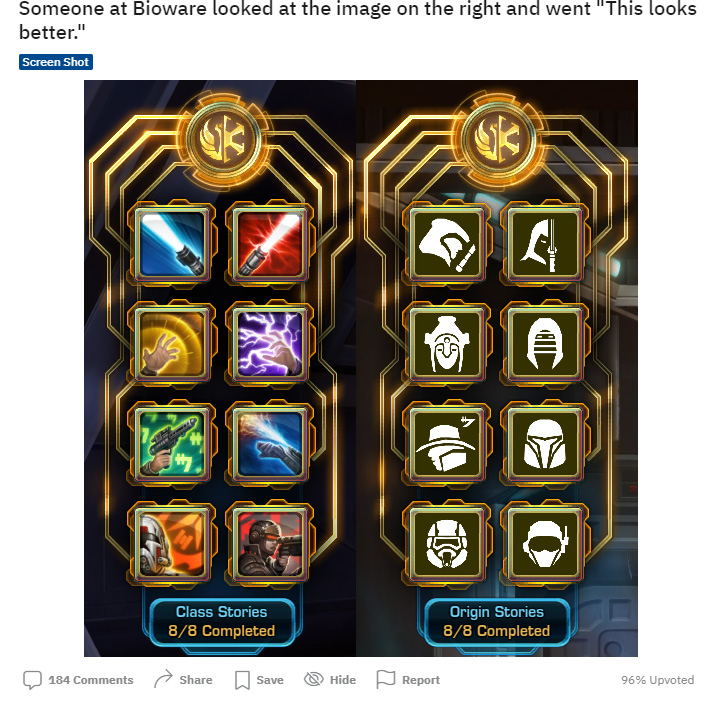 New icons (in the image on the right) were not to everyone's liking. Source: Reddit.

Poor ratings for the DLC on Steam

The dissatisfaction with the expansion can also be seen on Steam.. On the website, only 45% of user ratings are positive, which is categorized as "mixed reception".

This also affects the basic version of the game - yesterday Steam users gave Star Wars: The Old Republic 69 negative and 106 positive reviews. Prior to the release of the expansion on most days, positive notes were ten times more numerous than negative ones.