Tactics Ogre: Reborn is a turn-based strategy game from Square Enix, which focuses on creating your own tactics while waging battles against opponents. In the game we have a choice of many classes, which offer different skills. In this guide, we will describe all classes along with the way to unlock them, as well as list some of the best ones available.

Below is a list of all classes. Some of them are only available to non-human characters, such as beasts, dragons, etc., and some of them are reserved for other races or individual characters.

How to change class? 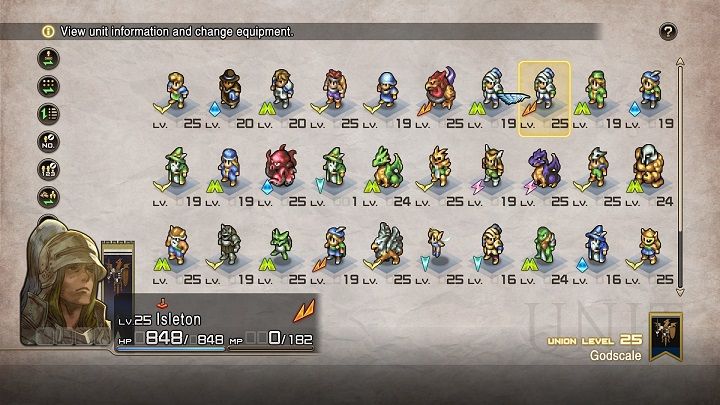 There is no shortage of classes in the game. Source: Steam | Tactics Ogre: Reborn

The class can be changed with an item called Classmark. It is a consumable item that can be bought from the store or found after defeating certain enemies. Here is a list of classmarks that enable you to change your class, along with their requirements and limitations.

There are two classes that cannot be acquired with Classmarks. These include the Lich and and Divine Knight.

This class is very popular due to its versatility. It offers a combination of high damage with support in the form of buffs and removing debuffs from team members.

This class is a true tank. The combination of high defense with a very high number of life points makes it worth having on the battlefield. Thus, Dragoon is great for distracting opponents from the rest of the units and keeping them in one place for a long time.

The biggest advantage of this class is its versatility. Vartan can use ranged weapons, as well as those for close combat, so it will work well in almost any scenario.

It can be considered one of the best classes in the game. Lord has a very high endurance, so it will work well as a tank, but instead of stopping enemies, it can deal with them itself thanks to its very high damage output.

This class can be used by Ozma. Knight Commander is characterized by very high speed and equally high damage, which in combination makes it one of the most effective units on the battlefield.

More guides on Tactics Ogre: Reborn can be found below: