HowLongToBeat is a valuable source of information for those who want to know how many hours it will take to complete or max out a game. The first players to complete Assassin's Creed: Valhalla have already shared their results. Their average shows that we 're dealing with a title that has the longest main storyline in the entire series, but at the same time is cannot hold a candle to its predecessor (Odyssey) when it comes to the time needed to complete all the attractions prepared by the developers. By the way, we can also count how many hours it would take to complete all the main installments of the series.

Before we take a look at the numbers, we have to note that in the case of Assassin's Creed: Valhalla only twenty results appeared on HowLongToBeat. The average value of the game time in each category may therefore differ from what we will see at this address in a month, for example.

However, those who are going to complete only Assassin's Creed: Valhalla's main storyline, should reserve about 52.5 hours for this purpose; this is the average time of the five player entries. However, it will take us an average of 65.5 hours to complete the main story without skipping additional missions and side activities encountered along the way. It should take us about 81.5 hours to complete all the quests and clear the map.

How do the above numbers relate to the basic versions of earlier installments? Well, it seems that it may take us even a little less time to max out Valhalla than in the case of Assassin's Creed Origins. Although Bayek's adventure had less than thirty hours of main storyline, the players needed an average of 82.5 hours to max it out. This was not the case with Odyssey, whose storyline took 42 hours on average, although 100% completion was a much bigger undertaking, taking on average... 131 hours. 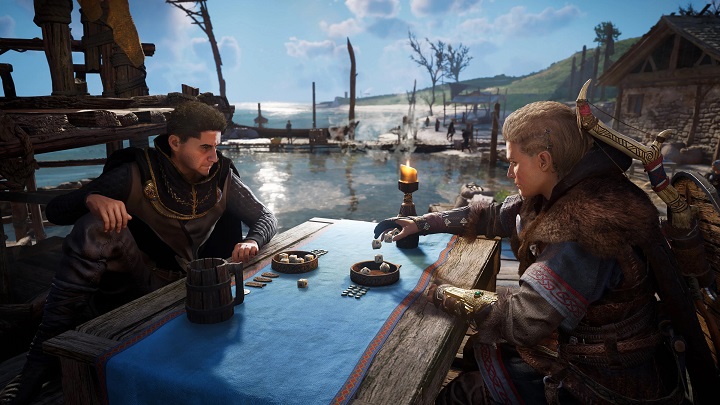 "Stop playing games and do something useful, like raiding some villages..."

As you can easily guess, the earlier installments were much smaller - it took much less time both to finish them and clear all the content. So let's take another look on the franchise as a whole and check how much time we would need to copmplete all the main installments of the series. As it turns out, less than you might think - just 269.5 hours; one might suspect that we could find people among us who have spent a similar amount of time in Odyssey alone.

And what about maxing out all of them? As you can easily guess, in this case the result would be much more impressive, because it would amount to roughly 719 hours. We are talking about almost thirty days of non-stop gaming or, if you prefer, less than sixty days of gaming twelve hours each day. It is worth noting once again that we are only talking about the main installments of the series. Players who would also like to complete the spin-offs, as well as all DLCs, would have to add at least several dozen hours to numbers. And yet, along the way there were also remasters, to which fans were also willing to come back...

In Assassin's Creed: Valhalla is available on PC, PlayStation 4, Xbox One, as well as Xbox Series X / S and PlayStation 5.