Warhammer 40,000: Dawn of War III may have been officially revealed yesterday by SEGA and its subsidiary, Relic Entertainment, but the information about the third installment of the popular RTS game series was rather scarce. Luckily, PC Gamer has revealed a good deal of information concerning the sequel to Dawn of War II in an article entitled Dawn of War 3: inside Relic's biggest RTS yet.

First and foremost, it has been confirmed that the story campaign will let us assume command over three factions: Space Marines, Orks and Eldar. The sides of the conflict will switch from mission to mission as their forces converge on the planet Acheron, where a secret weapon of great power is hidden. As the campaign progresses, the chosen faction will change with its development. Naturally, all of them will have their unique heroes, elites, super units and super abilities. 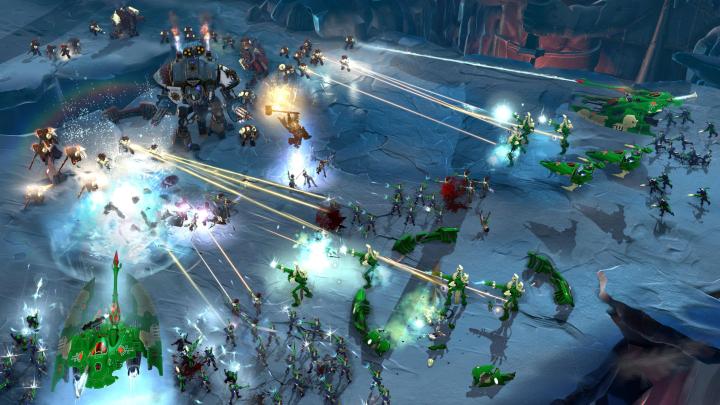 Battles are obviously the essence of Warhammer 40,000 and those in Dawn of War III are huge in scale, comparable to those from the original Dawn of War. Whats interesting, Relic aims to make Dawn of War IIIs battlefields clear and readable. Therefore, in the chaos of fierce combat, certain elements, such as laser fire or Assault Marines long-range jumps, will be distinct enough to be seen easily. Additionally, the developers take inspiration in how players paint their figurines in the tabletop Warhammer 40K. This furthers the readability of battlefields since units are more colorful and stand out against the background. The articles author claims that the less grim Dawn of War looks fantastic in motion.

Dawn of War III goes back to the Dawn of War-style bases. The players will have to build generators and capture requisition points on the map to secure resources needed to train units. The fans of Space Marines will surely be pleased by the possibility of dropping troops in special pods right on top of their enemies. If thats not cool enough for you, think about a giant orbital laser that can obliterate pretty much anything in its way. Once the beam hits the ground, we can move it around, and the more enemies we turn to ashes, the more powerful it becomes.

Following the example of Dawn of War II, the sequel will greatly emphasize the role of heroes who possess useful abilities and significantly better statistics. Before each battle, the players will also select three elite units, powerful enough to turn the tide of battle if used well. Throughout subsequent missions, we will be developing those heroes, increasing their stats and unlocking new skills for them.

Warhammer 40,000: Dawn of War III will also feature spectacular walker units, such as Imperial Knights or Wraithknights, that offer manually-activated special abilities. Moreover, we will make use of a simplified version of the cover system that focuses on clearly marked barricades that render units immune to ranged fire. However, this makes them vulnerable to melee attacks.

Warhammer 40,000: Dawn of War III is heading to PC only and its release is planned for the next year.