Following todays trailer leak, Activision has officially (and ahead of schedule) announced Call of Duty: Infinite Warfare, a new installment in the incredibly popular shooter game series. The title is set to be released on November 4 this year, marking a return to the roots of the franchise where large-scale war and cinematic, immersive military storytelling take center stage. As we can see on the above trailer, Infinite Warfare not only goes full-science fiction but even takes us to outer space and lets us pilot a vessel that looks like a spaceworthy F-22 Raptor. As far as the story is concerned, in Call of Duty: Infinite Warfare we will fight against the Settlement Defense Front to defend our very way of life.

Whats interesting, some editions (Legacy Edition and Digital Legacy Edition, Digital Deluxe Edition, and Legacy Pro Edition) of Infinite Warfare will feature a remastered edition of the cult Call of Duty 4: Modern Warfare. In the latter, well get to replay the story campaign (with prettier graphics, this time) as well as display our skills in the multiplayer mode that consists of 10 maps (including Backlot, Crash, and Crossfire). Sadly, for the time being it is unclear whether or not the remastered Modern Warfare is going to be available for purchase separately. 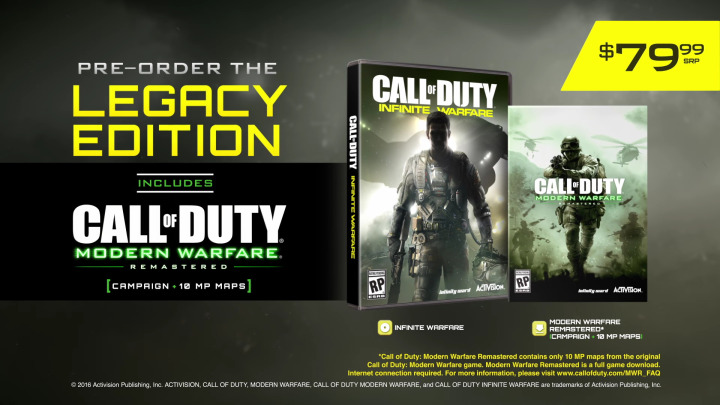 As advertised by its developers:

Curiously, the target platforms are unknown as of yet. However, it is rather safe to expect that Infinite Warfare will come out for PC, PlayStation 4, and Xbox One.