NPC stands for non-player character. They're sometimes also called independent characters, but we all know this means your next merchant, bandit, or companion in any game. These characters aren't controlled by any player, but we can often influence their "lives."

We kill the enemies, command the companions, and trade with merchants. Without us, NPCs lose the sense of their ostensible existence, though the player also feels a certain emptiness when there is no one to talk to (Fallout 76, I'm looking at you). On the other hand, there's no point fooling ourselves  conversations are very often of secondary importance. Players mostly crave these slightly more drastic interactions. Therefore, let us move for a moment to the land of sadism and massacre, to look at the truly cruel (yet creative) ways in which NPCs are oppressed or even killed by malevolent players.

Did you do any of that? Don't be shy, share examples of your cruelty with us in the comments. 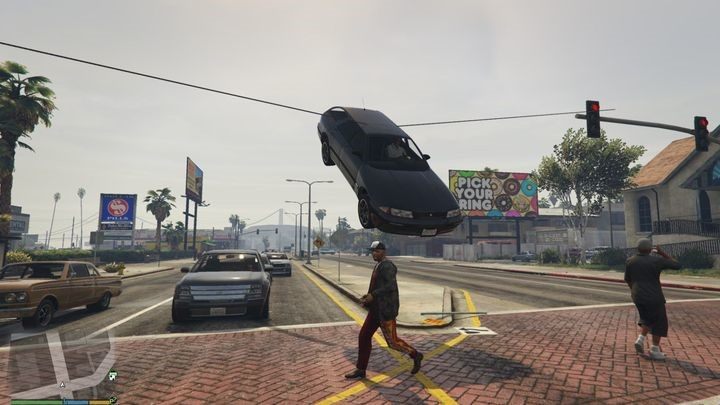 It doesn't take a rocket scientist to predict a car's flight path.

GTA V is the latest installment in one of the most popular video game series in the history of the industry. The title offers an open world of considerable size that we can freely roam. The player also has an extensive main plot thread providing over 30 hours of play (not counting side activities). "Five" stands out from its predecessors with the fact that we play as many as three main characters with completely different personalities. In addition to single-player mode, we also have GTA Online, which is governed by one law. The law of the street.

It's best to start with the obvious. At some stage in your life, I'm sure you've had contact with any part of Grand Theft Auto. And whether you've been following the damn train with CJ, doing mob stuff with Tommy, or gone manic with Trevor  I'm sure you know the feeling of pedestrians coming into contact with a speeding car. Chances are, even, that they're fond memories.

But why do we feel a kind of pleasure in the mass killing of random pedestrians? After all, it's not that we are degenerates who hide our psychopath alter egos from the world, only satisfying our perverse taste in video games. The answer is simple: because we can. The creators not only allow us to do this: they often encourage it. It is worth reminding that in the first, still two-dimensional GTA, we were actually paid for running over passers-by. You could make even more money by running over police officers, or hitting people with their own cars.