Despite financial limitations, small studios can delight with original use of pixel art (Yomawari, Eastward, Kentucky Route Zero, Axiom Verge), a surreal audiovisual setting (Fran Bow, Guacamelee!), A fresh idea for mechanics (Braid, Nihilumbra, Indies' Lies, Wytchwood), a unique story (To The Moon, The Witness, Detention) or simply a unique atmosphere (Hades, Rise & Shine, FAR: Lone Sails, Gris, Apotheon, Stygian: Reign of the Old Ones, Bastion). Their beauty, however, remains subjective – it depends on the player's taste and sensitivity as well as their current game preferences (these may change over time).

If we were to choose the most beautiful indie games, we would have to give up the most subjective criteria. In this case, it would be the above-mentioned qualities. I rejected some of these games with great regret, but the most objective criterion (though also not completely!) was the extent of advantage taken of technology available to developers. So that the engines they worked on were really given a run for the money. Of course, I primarily took into account the visuals, also adding, whenever possible, a few words about the soundtrack. Of course, if the list seems incomplete, be sure to share your suggestions in the comments! 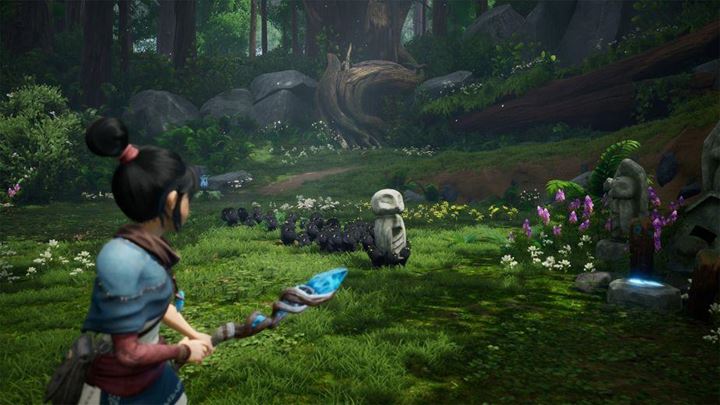 As this production was being developed by industry novices, hardly anyone expected that this small game would become one of the biggest (and most beautiful) hits of 2021. Although the world was ultimately small, and its openness was only apparent, it could hardly be considered a huge downer. Kena is simply a beautiful fairy tale told by means of modern technology.

The audiovisual setting perfectly complements the story – throughout the entire game you do not get the impression that either of them is just a pretext for the existence of the other. Importantly, although such a colorful fairy tale is primarily absorbing, some fights can also be quite a challenge, even for experienced players. In addition to dexterity in Kena, wits are also useful – the puzzles may not be very sophisticated, but sometimes they can make you run in circles for a while.

The combat mechanics are a perfect fit with the rest of this production. They're smooth, intuitive, and allow you to deliver powerful, satisfying attacks at the highest difficulty level. The creators prepared it using Unreal Engine 4, showing that it's an incredibly versatile engine.