The basic PlayStation 5 will come with an 825 gigabyte SSD. That's slightly less than the current standard of 1 terabyte. The problem is that even now many games prove that it's not enough. Call of Duty: Modern Warfare, along with the free Warzone, is approaching the limit of 200 gigabytes with each subsequent update. Destiny 2, with all the expansions is not far behind. Red Dead Redemption II required over 100 gigabytes of space on launch.

With the surge in computing power, the new console will offer higher-quality textures and larger worlds  and that means even more data to fit on the disk. In addition, one of the new features of Unreal Engine 5 is the "trimming" of uncompressed models to smaller, hardware-acceptable sizes on the fly, said to make life much easier for developers. Previously, such operations were carried out manually by the developers, and the games were given much simplified (and thus less storage-consuming) models compared to what was originally created. Now they won't have to do that and the original versions will appear in the files. And they will take up a lot more space. 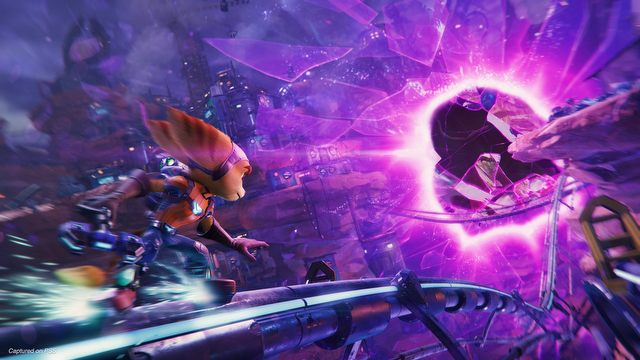 New Ratchet & Clank shows capabilities of an SSD. But there's a pricetag for it.

OR MAYBE THE GAMES WILL BE SMALLER?

Sony explains that faster disk drives mean smaller sizes of new titles. During the technical presentation of the new hardware, we heard that currently the same data is placed several times in the game files. This allows the standard disk to quickly find and load one of the copies of the required model or texture. On the SSD, such repetitions are to be unnecessary, so the game size itself is to be smaller. But does this mean the games will become smaller than they are now, or will they simply not be much bigger? Time will tell.

This means that the size of the games will only increase. Even now, in extreme cases 825 gigabytes can run out after installing fewer than ten games. In a few years, that might not even be enough to keep two or three titles on the disk. "And why would I need more than one game at a time," some will ask. The answer is easily answered by anyone who, for example, likes to go back to specific live-service games when updates with new content are released, and plays something different in the meantime. Or maybe someone likes multiplayer titles tested together with friends and has to have them on hand so as not to delay the start of a session.

The obvious solution to this problem would be to buy a larger storage. The trouble is that Sony, when it comes to storage, is betting on proprietary, high-tech solutions that are anything but cheap. It may turn out that the cost of a few-TB PS5 disk will be as much as the console itself. The Japanese have given us such an unpleasant surprise once before. Standard SD memory cards did not work with the PlayStation Vita; the console only accepted special flash memory produced by Sony, which was much more expensive than competing solutions. This was a hidden cost that discouraged many people from the handheld and became one of the factors determining Vita's failure on the market.