The growing importance of online aspect of the computer games has brought tremendous changes – from replacement of physical releases by digital distribution, through the renaissance of independent games, to the spread of paid additional content. These changes have also greatly affected the way we play with our friends.

Today, the concept of "multiplayer" is associated almost exclusively remote gameplay, without meeting other people per se. Until a decade ago, however, a "couch" multiplayer mode, in which participants huddled in front of a single screen, fought battles against the AI or faced off against each other.

This article focuses on joint expeditions against forces controlled by AI (or other players). Couch co–op, while it remains in the shadow of its online cousin, is not dead yet - in recent years there have been several games that have made excellent use of this gameplay mode, perfect for playing with a girlfriend or close friends. When selecting the games for this text, we were guided by two factors – the co-operation in the individual games had to be as enjoyable as possible, and the productions themselves available on any of the current generation devices or modern operating systems.

We felt that since the last update, you have had enough opportunity to complete all the games (of course in co-op) and we have prepared two more titles for you. You will find Teenage Mutant Ninja Turtles: Shredder's Revenge and It Takes Two on the ultimate pages of this article. 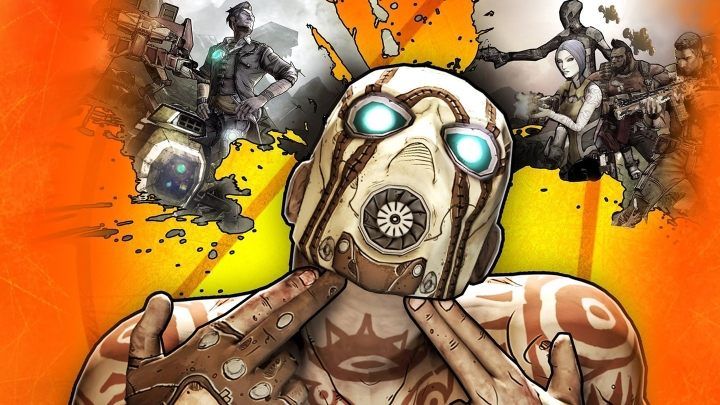 Co-op type: a campaign designed for 1-2 players (1-4 in The Handsome Collection version), local split-screen co-op only in console versions

You can dislike Gearbox Software for many things, not least the tendency of its Chief Executive, Randy Pitchford, to blame everyone but his own studio for the failures of his games. But there is one thing you have to give this team credit for – the Borderlands series.

Unusual hybrids of role-playing games and shooter games can be easily played solo, but the game is most fun when shared with friends. During such playthroughs, the unique characters' skills become even more important as they complement each other on the battlefield. Thus, players can explore further locations, take on tasks from twisted NPCs, murder hundreds of enemies (mostly mutated animals and Mad bandits), and collect weapons that are available everywhere in bulk, varying in terms of random parameters.

In contrast to other games, the series has cartoonish visuals, giving the Mad Max films a unique style and atmosphere. In addition, the wide variety of characters and their interesting skills and perks to develop on the next levels allows you to enjoy Borderlands even during the third and fourth playthrough. Finally – the shooting itself is fun and deeply satisfying. 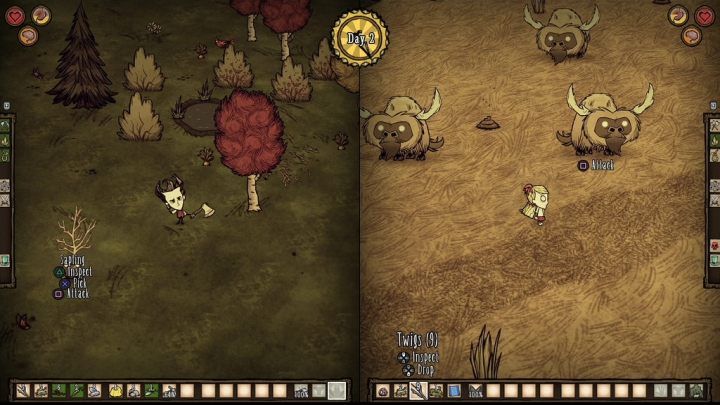 Don't Starve is not only one of the best survival games on the market, but also a representative of that genre (one of the first) that has actually been completed rather than being available as form of early access. Don't Starve Together was originally the same only with the online multiplayer variant. Subsequent updates expanded the game, however, with content from the first official single-player supplement, Reign of Giants, and brand new attractions. Console editions of DST also allow two players to play together on a split screen.

We wake up in a strange world and, as the title suggests, try not to starve. And not to die in general, because after a fairly peaceful beginning, when we mainly stockpile food and firewood, we quickly find that almost anything can kill us here. Giant spiders, werepigs, living trees, hellhounds, and even bees and penguins – there are many dangers waiting for the protagonists of Don't Starve.

Plus, you need to keep an eye on your mental health, eat regularly, prepare supplies for winter, avoid staying in total darkness at night, and protect yourself from moisture and heat. It's not easy! But the satisfaction of each survived Winter is incredible. It's so amazing that I've already played three hundred hours in different versions of Don't Starve. And I still want more!

Cooperative not starving on PC

Although officially we won't play the game with anyone on PC, players can use the rich mod library, among which we will find a modification that allows for a local multiplayer for up to three people. Interestingly enough, it is for Don't Starve Together but for the regular Don't Starve.