Doomguy armed in a toy store 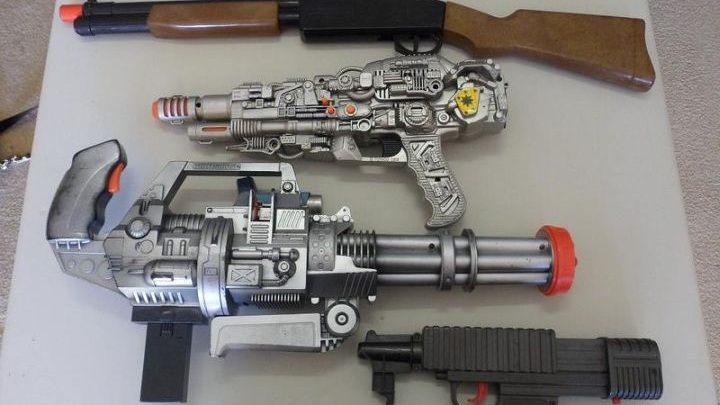 A fan of Doom, James "Blackmantis" Tingle, collected the toys used in the game's production and posted a photo of them under a CC license, so we can all enjoy them. See the second one from the top? This is BFG.

Do you know that weapons in Doom were modeled using a sort of photogrammetry? The arsenal that we see on the screen was created based on photos of toys. Kevin Cloud took photos with his right hand of his left hand aiming the gun (which automatically made the character left-handed), and then brought these pictures into the game, after some processing. Also interesting is the fact that Doomguy's hands are in fact Kevin's, so the man immortalized his left hand in a video game.

Side note: it wasn't just Kevin Cloud's hand that was immortalized in Doom. The same applies to his knee  more precisely, to the wound he had on the knee. It was used to develop a texture of blood covering various surfaces of the infernal levels.

And where do these weapons come from? The developers from id Software just brought them from Toys R Us. That's not only where the models for the pistol and shotgun came, but also how the BFG was conceived. They made some more effort with the chainsaw, using the a real tool by McCulloch. Why this one? Because that's what Tom Hall's girlfriend had in the garage... 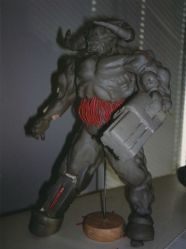 ART IN SERVICE OF GAME DEV

While we're at photogrammetry; some demons, as well as the protagonist of Doom, were also created with processed photos. In this case, id Software approached the matter with a little more dedication: the creatures were sculpted in clay (for example, the cyberdemon) or in latex and metal ( mancubus). The figures were photographed from different sides, and then processed, mostly color-graded and animated, eventually turning into two-dimensional sprites.