The genre of computer shooters has changed and evolved over the years. From simple, 2D background graphics, scrolled sideways or upwards, through the revolutionary "doom-like" first-person shooter games, to today's open worlds and competitive seasons rewarded with skins or other virtual prizes. Regardless of the changes, the most popular types of shooters are those seen from a first-person perspective. The 90's had been witness to many such titles, such as Doom, Quake, Duke Nukem and their numerous followers.

These games were a complete success - we tend to remember them warmly, at the same time discarding newer titles for lacking that "something". Nostalgia is the reason behind it, as not all parts of these games were better than the present-day ones. Primitive and rather conventional graphics along with vestigial plot leave a lot for the imagination. Perhaps it was through this imagination that we took these games a little more personal?

But it's hard not to mention the more polished maps that created intricate mazes with hidden secrets, which as the time progressed, have been replaced by simple, scripted corridors. The games of old did not order the player where he should go, and did not offer tutorials - this combined with high difficulty level and no health regeneration made these games a serious challenge.

Some modern productions attempt to recreate that feeling, which involves simple visuals, gameplay, or the ways levels are created. So we've picked out ten recently released (or announced) games that bring us back to the 1990s, to the years of the great FPP revolution. Here are the successors to Duke, Quake and Heretic.

Do you know more similar games? Write more about them in the comment section. 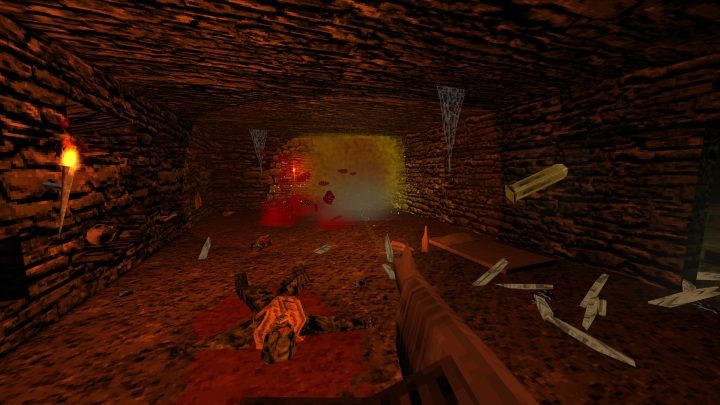 For Polish players, the name David Szymanski sounds rather homely, but the creator of DUSK grew up on the northeast coast of the United States - the areas of New England that were the backdrop for H. P. Lovecraft's short stories. Szymanski, however, was not fascinated by the work of a loner from Providence, but grew to love the first installment of Doom in 1993 and its subsequent clones. From this passion came DUSK, a work also heavily inspired by Hexen, Redneck Rampage and Quake I. This mix results in unique armament - the game features both rifles and crossbows, as well as sickles and something that resembles a nail gun.

Opponents, as well as maps, are equally diverse. We encounter mysterious cultists hiding below the ground and in churches, and visit urban locations. As expected, the plot is rather scarce. All of this creates a backdrop for particularly blood and juicy rampage, enabling you to relive the 90s once again. It is also worth mentioning that the music was composed by Andrew Hulshult, who composed the soundtracks to Brutal Doom and Rise of the Triad.