I haven't finished Cyberpunk 2077 yet. Actually, I barely finished the lengthy prologue and the whole Night City has just opened up for me. I'm not complaining, because my original V is so far faithful to the gameplay style that I want. Nevertheless, I feel that I could have done a few things better. It didn't work out because, first of all, the game is huge and a lot of time is needed to get at least a partial understanding of it, and secondly, the creators didn't make the game any easier for us, limiting the number of tutorials and all kinds of hints to minimum.

And while on the one hand, it's great that we got a juicy, open-world RPG that doesn't lead you by the hand, on the other, remember: my ignorance can become your salvation. Or simply an act of purely altruistic help. That's why not only me, but also the rest of the editorial staff, who have already been playing CP2077, brainstormed and drew up a list of beginners' tips that can be useful to everyone who starts their adventure with the latest production from CD Projekt Red.

Don't forget that we have already prepared a guide for Cyberpunk 2077, which may be instrumental in discovering many other aspects of the game that we will not talk about in this article. 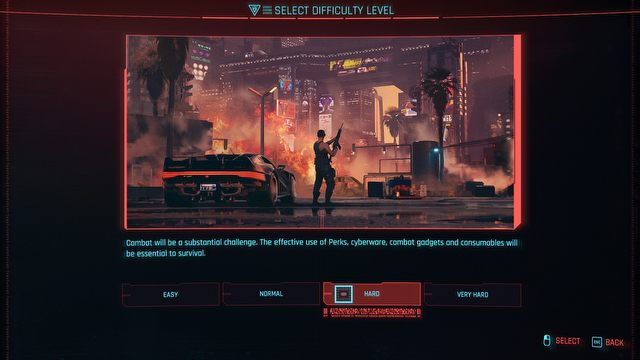 Cyberpunk is not the most difficult RPG game in the world.

The choice of difficulty level is an element of most RPGs and each of us, knowing our skills, will have no major problems with the choice. In the case of Cyberpunk 2077 , however, we have a message for intermediate players  think twice about whether you want to choose "normal" if you always do it. It's not very challenging, so if you would like to have a couple of more demanding mechanics and make the fights a little bit more interesting (and they can be really interesting), the Hard setting can be a surprisingly apt choice for you. As for the extremists focused solely on the plot, or quite the opposite  they should opt for easiest and most difficult difficulties respectively. And these guidelines are based 100% on the editorial experience.

It doesn't matter if you change the difficulty level during the game. You can even juggle it according to your needs  you just need to reboot the game. However, you will not lose any achievements, as none of them are linked to the level of difficulty.

I spent more than 20 minutes on the first screen, wondering what past would be perfect for my V. Eventually I opted for corpo, but comparing the experience of other players trying their hand as nomads or punks, I find that it's not worth pondering so much on this choice. Although we will get three different introductions (vide Dragon Age) and additional dialogue options during some conversations, this isn't reason enough to get a big headache before even starting the game proper. The initial missions are not very long, and a moment later, we are already engaged in quests common for all origin stories.

As concerns character creation  personalize them to your heart's content, from hair to genitals, and don't be afraid that you'll create a character that's too crazy or challenging, because the people of Night City will remain indifferent to your appearance whatever it may be. Only gender plays a greater role when it comes to NPCs' reactions to V.