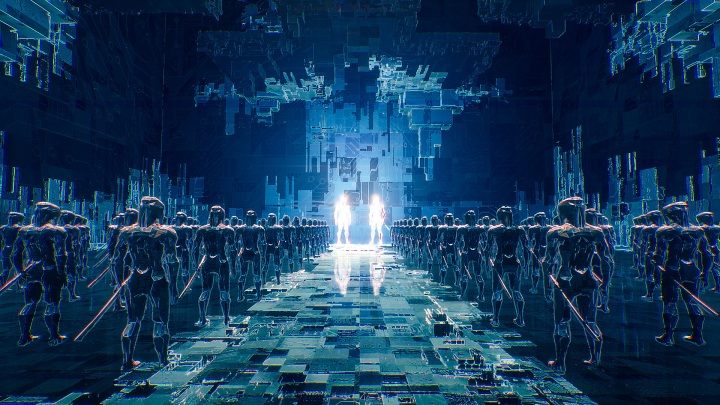 The world has been destroyed, and the last humans have hidden in a giant tower. Society was divided into castes determined by implants installed in childhood. The creator of this entire community died years ago in unexplained circumstances, and now one calling himself the Keymaster rules with an iron fist. Violence and poverty dominate, leading to revolts. Players get to lead the rebellion, and are blessed with supernatural abilities that enable them to fight both in the physical world and in cyberspace.

Ghostrunner is a first-person action game in which we play as the cyber ninja with extraordinary combat capabilities. The game requires the player to be in constant motion and to be very precise because one-hit-one-kill mechanics are unforgivable. Our goal as a developer is to offer players a demanding, but not frustrating gameplay, hence the densely scattered checkpoints, so each encounter with opponents can be treated as another challenge. The game has great potential in terms of speedrunning, so you can be sure that we will not forget about it during the release of the game later in 2020.

The gameplay in Ghostrunner revolves around the exploration of consecutive floors of the tower, filled with enemies to eliminate and secrets related to both the past of both the structure and the protagonist. The action will be shown from a first-person perspective, and melee weapons will be used in combat to eliminate opponents quietly or in regular clashes. Players will be able to slow down time and use the energy whip with which one can both disarm enemies and travel greater distances in the air.