Kingdom Come: Deliverance is a RPG game set from a FPP perspective, taking place in historically accurate medieval Europe. The game itself is a debut of a Czech studio Warhorse, consisting of experienced designers whose previous works include the likes of Mafia and Operation Flashpoint. The game is being made all thanks to crowdfunding  Kingdom Come got the attention when funding reached the point of 1,89 million dollars (the budget has grown since then obviously). The title is being developed with PC, Xbox One and PlayStation 4 in mind. Interestingly enough, the game is being split up into three separate acts/episodes, while the first is set to come out in Q4 of 2015 (next episodes are to be released after, within a six-month interval from one another). In this article, You will find the essential information regarding the game that have been released up to this point, dividing them into themed categories (a table of contents is on the right). This compendium will be kept up to date with all the released updates. 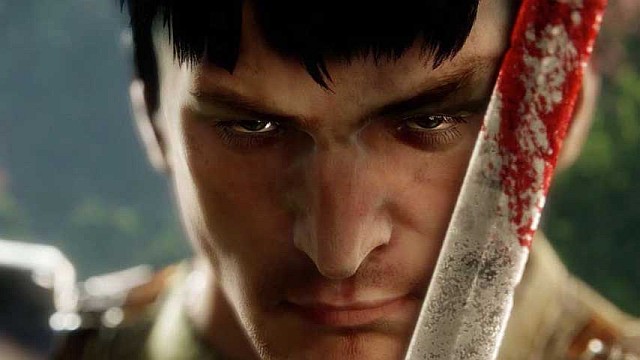 This is our protagonist, Henry. Please excuse his grim expression  he just had his family and his entire village murdered. You know how it goes...

We play as Henry, a young son of a blacksmith. One day, our hero loses everything, what he held dear  his village is burned to cinders and his family slain by a warring army, which just happened to be raiding the local areas. Torn by guilt, the hero swears to honor his fathers last words and gets involved with politics and great intrigues. Keeping in mind, that our hero is not some Chosen One favored by destiny  but merely a pawn in a conflict on a much bigger scale. Often will the blacksmiths son end up hopeless when on his own.

As it was mentioned before, the action of Kingdom Come: Deliverance is set in a historical era  which will be the basis for the events that involve our hero. The game takes off in the Kingdom of Bohemia (now the Czech Republic) and the year is 1403. At that time, the ruling Wenceslaus IV of Bohemia is dethroned and captured by his brother, Sigismund. The country stumbles into a civil war and anarchy, resulting in the destruction, amongst many others, of our heros hometown. Apart from Henrys fathers will, which will eventually lead us to searching for the rightful ruler, our hero will also be driven by vengeance for the death of his loved ones.

Of course, the mission wont be a walk in the park. In fact, the task at hand will take years to accomplish and will take us to various places across Central Europe, allowing us to take part in several historical events (amongst others, historical battles, supposedly the likes of the Battle of Grunwald) and meet characters from history textbooks. Also, we will partake in other epic events such as castle sieges (on both ends). The creators promise, that the events included in the game are as close as possible to resembling what actually took place near the dawn of the XVth century  diverting from facts will be rare, excused only by certain plot elements.

The story is certain not linear, facing us with a fair share of choices. It is also worth mentioning that, apart from the main storyline focusing on the blacksmiths son, the game will include an additional sub-plot involving a young woman, tasked with, among other things, with saving Henry from a conflagration-stricken village. 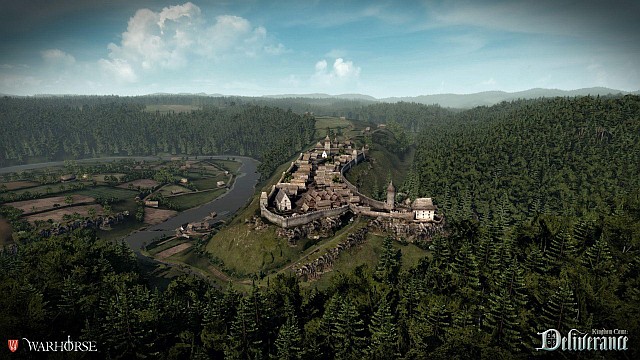 The world is based on real locations.

An open world divided into three parts (one for each act) will be at our disposal. Initially, the world consisted of a single area, the size of Cirodiil form Elder Scrolls IV: Oblivion, but during the development the territory increased in size by 20-30%. As mentioned, the journey starts in the Kingdom of Bohemia, however, consecutive chapters will take us to different parts of medieval Central Europe (one of them presumably being the Kingdom of Poland, or the lands occupied by the Teutonic Knights, if we really are to set foot in Grunwald). As certain locations are far away, we will get to them by fast travel. Speaking of sizes  we already know that the first area will feature about 150 points of interest, consisting of a large city, a town and a dozen of villages and caves.

The developer boasts, that we will get to see an exceptionally lively and authentic world. Owing much to the games NPCs who will be gifted with advanced AI, influencing their everyday routines (work, leisure, etc.), and an ability to react to our actions. What is more, certain characters appearances will be unique. With our actions we will be able to change the world  for example, killing the innkeeper will result in the inn shutting down and changing the routine of a few NPCs. We could also be labeled as a criminal across the country, if we are caught red-handed. As it was mentioned many times before, Kingdom Come takes place in historical times and the likes of fireballs, dragons, enchanted swords and such will not be present. Magic and mysticism will be limited to certain beliefs (mostly folk), which were typical in medieval times  for example, we will be able to witness witch hunting. 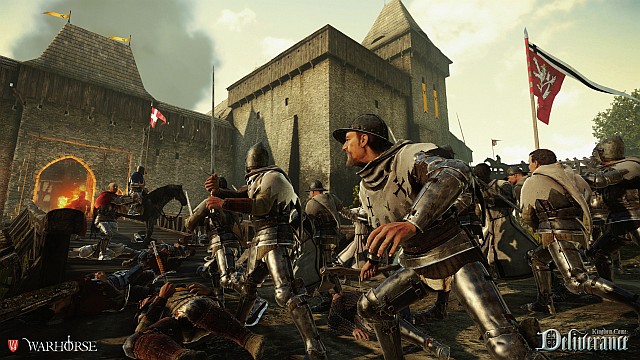 Spectacular battles, sieges  the combat in Kingdom Come: Deliverance is likely to be an unforgettable experience.

As befits a RPG, we will battle, engage in conversations, develop our skills, craft, take care of our gear, do side quests and so on. More on that in the next sections. Kingdom Come: Deliverance is going to be a challenging game and sets out to be hardcore  apart from extensive RPG mechanics, our protagonists need to sleep and nourish are a proof of that.

The hero is set from the get-go and personalization options dont seem to be present early in the game (apart from our looks), that however changes later on in the game. A standard class system is absent, as the creators dont want to limit us in any way. If we want to, we will be able to use both the skills of a warrior and a thief, and mix it up with some of the bards talent  if we only fancy that. Apart from a large set of abilities, our character chart will contain five primary stats, four ratios (health, stamina, hunger, drowsiness) and also perks giving us special abilities. Henry will not only grow by completing quests, but also thanks to book reading and teachers met along the way.

Combat is one of the games most characteristic elements. The creators are putting much effort into working with experts in medieval fencing, to do it justice in form of few different combat styles to choose from. We will receive a complex system, based on striking various body parts of our enemy, blocking, parrying, refuting incoming weapons, using our enemys mistakes to do counterattacks and such. Basically, encounters are to resemble those form slasher games (even combos are to appear), what is more, they are intended to be quite demanding. A few blows will be enough take anyone down, so tackling more than one enemy at the time, may result in a quick death. When it comes to arms, Henry will get his hands on most of the medieval weapons (swords, daggers, sabers, hammers, axes, bows, crossbows, etc.). Interestingly enough, combat on horseback will also make its way into the game. 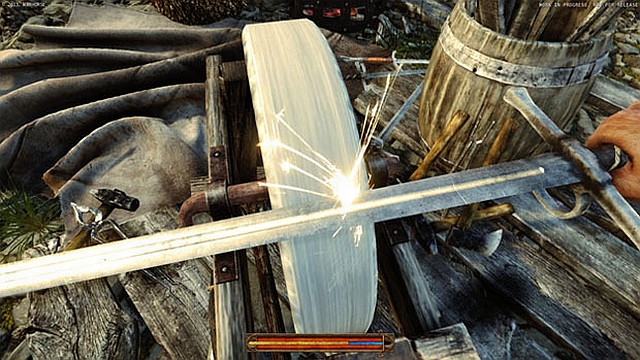 Even the craftsmanship system seems exciting and fresh.

Henry, being a blacksmiths son, wont be an amateur when it comes to crafting. Apart from making swords and such, our vengeful hero will also prove his mettle in crafts such as alchemy, cooking and alcohol distillation. Such activities will be represented by minigames.

This element deserves the spotlight, as it will be expanded to an unparalleled level. The protagonist will wear as much as 16 different armor and clothing elements, which will additionally form layers  giving countless combinations of different types of armor to guarantee optimal protection. As might be expected, armor deterioration will also be present, even in form of needing to wash the blood of our garb.

A latin saying  nec Hercules contra plures, will be more accurate in Kingdom Come than in many other games, as characters able to accompany us in travels, as well as in combat, will be a plenty. Some will only join temporarily and others will stick for a while. However they wont be conventional party members, as we wont be able to give them orders or influence their abilities and equipment, not mentioning full control over them.

Various creatures will have an impact on the gameplay in Kingdom Come. Horses are in the lead here, as they will serve as mounts, in three different forms (combat, lance and normal) defined by individual stats and abilities improving with every level and will be equip-able with armor and accessories. Dogs will also play their part. One of the fund-raising goals allowed implementing those animals as companions and allies in combat. As a matter of fact, we will encounter many animals both with positive or neutral attitude (such as cows and hens) as well as with negative attitude, including bears and boars. 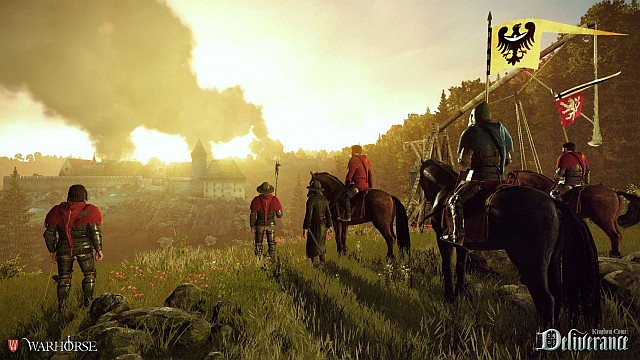 Thanks to CryEngine 3 the graphics will truly be a feast for the eyes.

The game is created with the use of the advanced CryEngine 3, well-known from the Crysis series. Keeping in mind Warhorses relatively low budget, the creators might not be able to optimize it, like other major studios do. Although the studio has still managed to render graphics that are keen on the eye.

It is still too early to go into detail, but the producer claims that a comfortable playthrough in Kingdom Come will be able on a PC with the insides similar to those of a Xbox One ( 8-core CPU 1,75 GHz, 8 GB RAM, AMD graphics with peak throughput 1,23 teraflops). 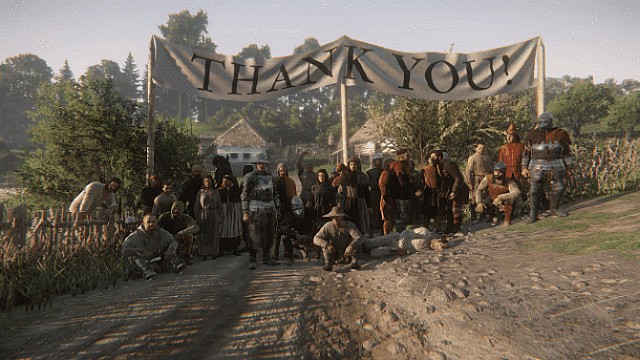 The creators were quite surprised with the Kickstarter success.

Despite achieving their goal in February of 2014, the creators are still increasing the games budget. As of now, it is 2,101 million dollars. Hitting the last two thresholds (2 million and 2,1 million) will enable hiring a better voice-over cast, along with a superstar (Sean Bean is amongst the considered actors) and preparing an illustrated codex, which will explain the events, places and characters appearing in Kingdom Come: Deliverance.

Alpha tests have started on the 22nd October of 2014. They were carried out only on PCs and the developer invited anyone who has pledged at least 45 dollars. Initially, in the alpha only a single village and some of the planned mechanics were present (horses and combat on horseback were not available). However, flaws are eliminated in the next actualizations, taking place mostly on a bi-monthly basis. Beta tests (once again only for those who have pledged 45$ at least) are planned for a not yet specified date somewhere in 2015. The developer speculates, that they will be carried out on all of the target systems (PC, XONE, PS4).

The game is completely focused on the plot and the singleplayer campaign is a priority. A multiplayer is not planned, however, there is a chance that the developer will consider at least implementing a co-op mode.

After the game is finished, the creators want to release the tools they used, to the player, to allow them to create new content in Kingdom Come: Deliverance. In other words, the developer will offer full support to modders.