Creators of new installments of cult-classic game series constantly have to face a dilemma. The game must appeal to modern audiences and, to that end, offer fresh elements, while on the other hand, meet the expectations of longtime fans. Now, they like to forget that the productions they used to love, more often than not, delighted them because they were revolutionary at the time – and now, all they expect them to, is to be what they remember them as.

This problem cemented for good, for example, the Heroes of Might and Magic series, which never managed to come out of the shadow of the third installment of the series and after a few more or less successful, but forever considered profane, ended up in the freezer. The brawler genre has been struggling with it for years, unsuccessfully figuring out how to open to new generations while not discouraging those who are still with it. There is also considerable opposition to the third Baldur's Gate coming, whose creators dared to do something more than a carbon copy of what the series once was.

Similar voices can be heard in the new installments of the Resident Evil saga, which in "seven" strongly departed from the previous formula and partly continues this trend in the still fresh Village. In this case, in my opinion, it's especially out of place, because this series, practically from the very beginning, was very open to experiments with its formula. 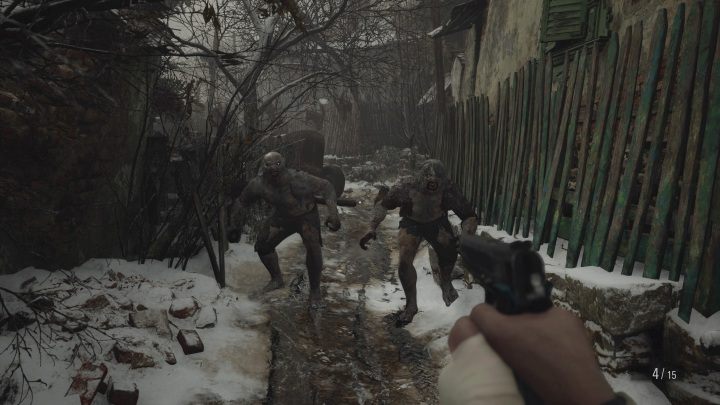 While the vast majority of the audience is delighted with RE Village, here and there you can read voices of complaint about too much departure from the classics.

Back in 1998, the second Resident Evil boldly departed from its predecessor by shifting towards action, setting the story in a completely different location in terms of atmosphere, and dispensing with such wonders. And it was still very conservative compared to the part four released in 2005, which set a new direction for the series, which ended up a gigantic success... and in retrospect became a curse that almost sinked the brand. Before that happened, however, Resident Evil 4 went through an incredible journey.

Although Resident Evil 4 debuted in 2005, development had begun way back in 1998, when Resident Evil 3: Nemesis hadn't even debuted on the market yet. Seven years of work on a game is a lot from today's perspective, but it is not unimaginable. After all, we waited 9 years for the likes of The Last Guardian ; Final Fantasy XV took 10 years to develop, and the legendary Duke Nukem Forever was brewing up for entire 15 years.

Two decades ago, however, seven years was an eternity. The vast majority of high-budget productions at the time were made in less than a year, with only a handful taking two years to complete. Such a long period of work on the game was due to the high ambitions of the project and the problems associated with them. As a result, the title went to bin as many as four times before it finally made its GameCub debut. 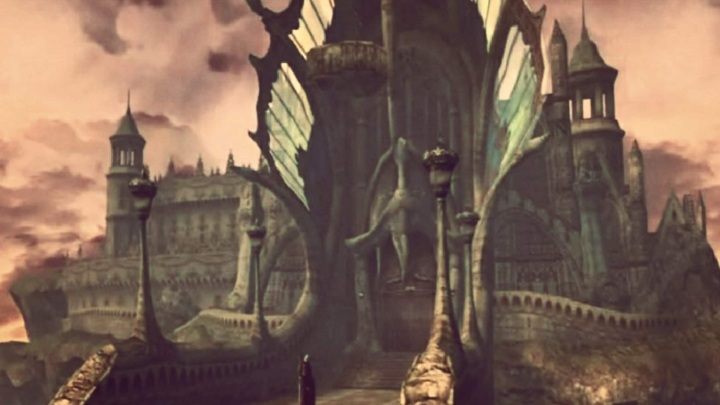 The castle on Mallet Island, where the action of the first version of RE4 was supposed to take place, was visited in another game.

Initially, the game was created not for Nintendo console, but for the upcoming PlayStation 2. The first version of Resident Evil 4, now called "BIOHAZARD 4 stylish version" was developed by a team led by Hideki Kamiya, who previously shaped the second installment of the series. In his vision, the four was to put the series on an action-packed track, and be much cooler in every possible way. The main character would be one of the sons of Earl Spencer, Tony Redgrave, known to fans of the series, and the plot would focus on the mystery of superhuman powers possessed by the protagonist and his twin brother. In order to solve it, the protagonist would go to a secret Umbrella Corporation facility located in a gloomy castle on the European island of Mallet.

Kamiya abandoned the cumbersome controls known from previous entries, and introduced a dynamic camera system and innovative combat solutions. In his quest to make an action-oriented game, he moved further and further away from survival horror, and not everyone was crazy about the notion. Opposing this direction was the father of the entire series Shinji Mikami, who gradually persuaded members of the development team that this was not the way to go. Eventually, he was able to convince Kamiya himself as well. 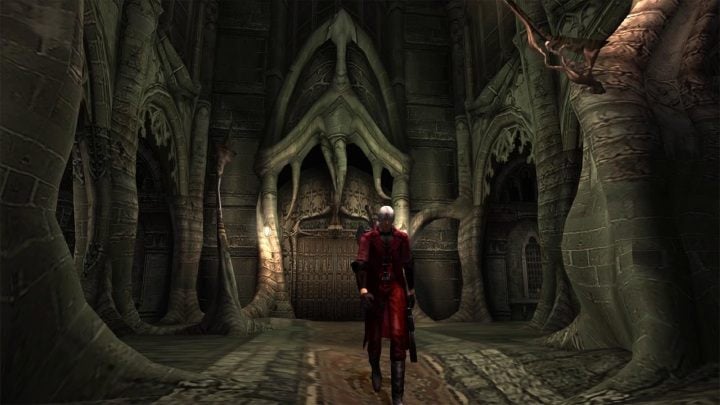 If you know what to look for, Devil May Cry's pedigree is quite apparent in Resident.

The gentlemen came to an agreement, as a result of which the work on "BIOHAZARD 4 stylish version" continued, but as a completely new brand. Tony Redgrave became Dante, zombies turned to demons, and all traces of the Umbrella Corporation were removed. Despite that, there was a lot of the original Resident Evil there. Devil May Cry debuted in 2001 and proved a smash hit, establishing not only another blockbuster game series, but also a subgenre of action games called "slashers." Apart from DMC , its most famous representatives include Bayonetta (also the work of Kamiya), Metal Gear Rising and early versions of God of War.

Castle in the mist

The unexpected inception of Devil May Cry brought the development of Resident Evil 4 back to square one. The devs went back to the drawing board in 2001, and Hiroshi Shibata, who had previously led the background artists' team for Resident Evil 3: Nemesis, was anointed as its new father. In the meantime, the series began migrating from the PlayStation to Nintendo consoles, hence part four, like Resident Evil 0 and the Resident Evil remake , was already being developed with the GameCub in mind from that point on. 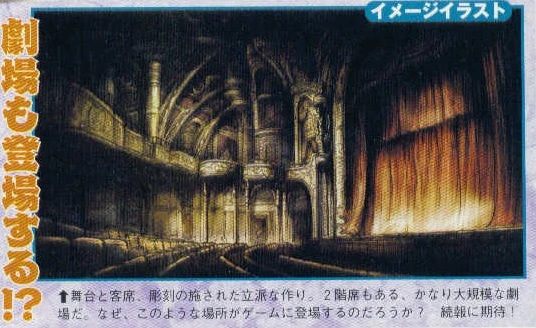 One of the locations considered in the "Castle version" was a theater.

Not all ideas from the "stylish" version were abandoned. Shibata decided to use the materials gathered by graphic artists and set the game in a castle inspired by Spanish, English and Irish buildings. The issue of the protagonist's superhuman powers is also not entirely ignored, replaced by a progressing mutation.

This version of Resident Evil 4 is remembered by several names, mainly the "Castle Version" and "Fog Version." It was at this stage that it was decided that the main character would be Leon S. Kennedy,known from Resident Evil 2. As one of the members of an elite squad of soldiers, he was sent to Umbrella headquarters located in the gloomy Spencer Castle. Shortly after landing, the team is attacked by Black Fog, a misty creature that kills everyone but Leon and infects him with a virus. Not only would the hero have to defeat Umbrella; he'd also have to constantly fight against the drastic changes occurring in his body. A young woman, a victim of the evil corporation's experiments, whose companion would be a mutant dog, would also play an important role in the scenario.

The aforementioned Black Fog was supposed to be a big "highlight" of the game, but it turned out a nuisance for the developers. The foggy, tentacle-like creature was too taxing for the hardware of the time. So in the end, Shibata gave up on the idea, which forced major changes in the story. And so, the next version of Resident Evil 4 was born. However, as with "Stylish Version," the "Castle Version" didn't go to waste. The script was handed to another team inside Capcom. Kazuhiro Tsuchiya decided to use the plot idea with the aforementioned young woman with a dog, building the 2005 survival horror film Haunting Ground around this concept. Although the game did not win the hearts and minds of reviewers, fans of the genre remember it with fondness today. 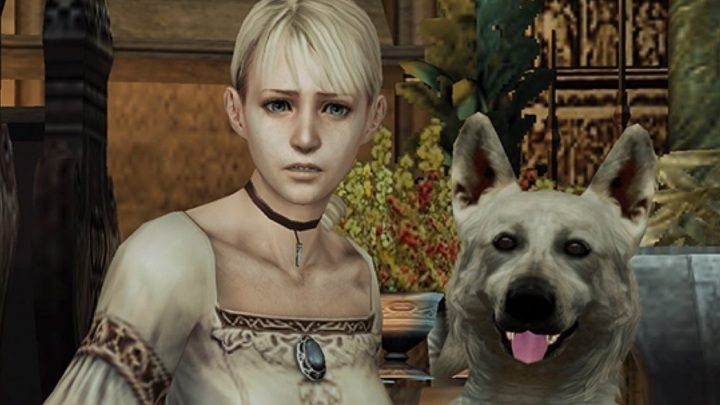 A young girl and a dog – Haunting Ground had some ideas from the Castle version Resident Evil 4.

Hallucinations and a man with a hook

The next version of Resident Evil 4, called "Hallucination version" or "Hookman version," is the one we know the most about and there are also videos of it in action. One of them, coming from the 2003 E3, you can watch below, and I encourage you do – it looks impressive even today:

The script for this version was never completed, so all that's known is that, like the "Castle version," it would use the theme of the virus that Leon was infected with. In this release, it would cause all sorts of hallucinations that could hurt the protagonist. This approach opened the door for the creators to use whatever spooks they wanted, two examples of which we can see in the video above – a ghost with a hook coming out of the picture, and killer dolls. The developers were inspired by such movie classics as Jacob's Ladder, "The Fog, and Lost Souls, and their ambitions were to create a game as terrifying as the competitive series, Silent Hill.

An advanced system was supposed to govern the hallucinations, thanks to which they would seem to appear randomly. The entire image would be distorted, which Shibata's team wanted to solve by loading two versions of each room simultaneously into the console's memory and switching between them. Unfortunately, GameCube's 24 megabytes of RAM were not up to the challenge. It turned out that no matter how the creators would try to cheat it, they were not able to put more than one enemy in the game at a time. In the fall of 2003, another version of Resident Evil 4 was released.