My adventure with GreedFall has already turned into a real rollercoaster  and we're talking about a game that's not even out yet. I became interested in the game just after the announcement, as soon as I heard the words 'Colonial Age', but my enthusiasm quickly diminished, as hopes for an African or Asian setting turned out futile. When the Spiders studio showed the game for the first time, I was so devastated by how bad it looked, and I stopped following reports about the title altogether. It wasn't until gamescom, when I actually had to see GreedFall, that I had to embarrassingly reintroduce myself to the game, like a couple from high school at a graduation party. But instead of awkward conversations and sour face expressions, our love suddenly blossomed again.

Where did the bad first impression come from, though? Well, the latest production from Spiders is just a hopeless show to see. The game didn't convince me I judged it too harshly  especially its crudeness  because although it's a cute monstrosity the sort of, say, Elex, GreedFall still looks terrible. The rigid animations look bad, the hero's mobility is tragicomedic, being stuck on elements of the environment is the daily bread, the world seems empty, and one look at the faces of the characters instantly takes us back to 2008. The producers of this title insisted that they will do a full-fledged RPG for 40 hours, and at every step, you can see they just don't have the right budget for this. But my advise to you is: don't do the same mistake I've made, and don't judge this game by the pre-release materials.

My kind of an RPG

Having grown up in a gaming community that has deep affinity to games like Gothic and the more recent Kingdom Come, it ultimately isn't that difficult to turn a blind eye on the coarseness of GreedFall. Even more so when you realize that underneath that ugliness hides a fleshed-out gem of an RPG, with complex mechanics and a few fresh solutions. You know, the kind of RPG that's not ashamed or afraid of its heritage, the kind of a game BioWare would make if it hadn't gone to the dark side. This game goes far out of its own way to allow the player the freedom in crafting their very own story. When we leave the Old World ravaged by a deadly plague, and set foot on the island of Teer Fradee, we have only one mission  find a remedy for the plague that decimates our homeland. And the rest?

SPIDERS WANTS TO FILL THE VOID AFTER BIOWARE

Associations with BioWare games are not accidental  recently, Spiders CEO, Jehanne Rousseau, said in an interview that her company wants to fill the void left by BioWare. She added that her team is, of course, smaller and does not have such a budget, but that she still hopes fans of BioWare will enjoy GreedFall.

All power to the player!  this was apparently the battle cry of Spiders' developers during the production of GreedFall. It's really hard to pick on the fact that the movement of my hero's arms looks a bit stiff, since in return, I can educate him in 17 different ways, getting a different experience each time. Instead of one development tree here, we have three of them  skills, talents and abilities. The first focuses on combat, new attacks and passive effects; the second, on non-combat aspects such as alchemy, crafting and charisma; and the third one is about unlocking ever better equipment and increasing statistics. 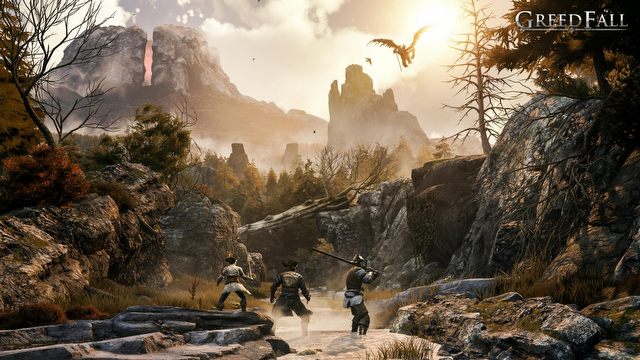 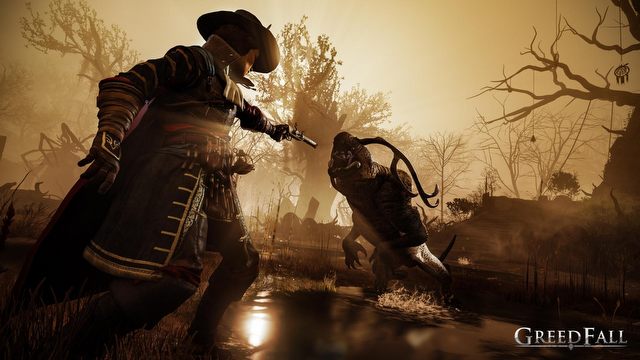 Each tree requires a different type of points, each one unlocks some occasional dialogue options, each one allows a different approach to certain missions. You know about potions? Great  in some places, you'll come across walls that can be broken through with sheer firepower. You've mastered your balance? In that case, you can sneak using narrow beams over the precipices. But not only our skills dictate our options. If you have a companion that's native to the island, you can try to get along with a warlike tribe that would otherwise attempt to kill all the newcomers. Getting an enemy faction's attire (each piece of clothing is assigned to one of them) will allow you to enter their headquarters without raising suspicion. I really could go on like that for a while.

EN GARDE!  A WORD ON COMBAT

After a forty-five minute session with GreedFall, it's hard for me to talk about combat  my team only had two chances to fight with some wild animals. The skirmishes were not particularly complex  two of our comrades can be given simple orders in an active pause, but even without it, they manage without much hassle. We have a range of attacks with melee weapons, firearms and magic, plus a lot of special skills  my heroine, familiar with the art of witchcraft, could, for example, instantly move away from the enemy and continue the attack from afar. The system is robust, although there's nothing spectacular about it.

This variety of character building options, the approach to quests, different ways to treat comrades, who, depending on what we do, can even turn against us and become our enemies  this is the gameplay freedom the PR guys of big companies like to go about so much, but in this case, it's actually here. Unfortunately, GreedFall also holds the player's hand sometimes  for example, items that are important for the plot stand out from the rest like some moron on a highway  just in case you felt like missing something  but this is neutralized by some smaller, but brilliant tidbits. Have you noticed, for example, that animals in every game are, in principle, always walking, as if their diet consisted exclusively of adderall chased with coffee? Here, they come to prey only after dark, which makes night hikes much more dangerous, and the day they spend mostly sleeping, which in turn facilitates hunting. 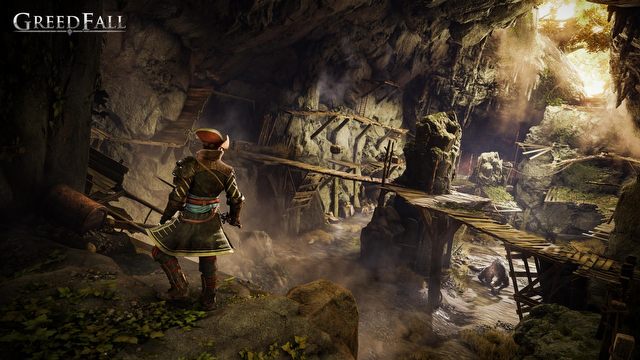 Of course, I have no illusions that a lot of people will bounce away from GreedFall. This is a game that could as well have come out in 2011  in terms of graphics, it's two leagues below the competition. But in terms of complexity, the mechanics, in particular the development of the character, the game leaves behind many high-budget rivals. The only question is whether its crudeness will ultimately overshadow its merits. Expanded skill trees  a cool thing, but is it enough to cover limited character movement and empty cities? I have been playing GreedFall for three quarters of an hour at gamescom  long enough to get sold on the creators' vision of a real RPG, and short enough to forget the shortcomings. However, there's no saying if they won't prove unbearable in a forty-hour campaign.

Regardless of the genre preferences, GreedFall is definitely a game for passionates of linguistics. The creators approached the matter of native speakers seriously, and, in cooperation with knowledgeable scientists, developed the grammar and vocabulary of the indigenous population of Teer Fradee. Based primarily on the Celtic family, the language sounds completely different to those with which most of are familiar, but after several hours of playing, you will probably start understanding whole phrases. It'll be useful for the next approaches, because as I've learned during the game, the natives don't care about the fact that I'm trying to eavesdrop them, and annoyingly, they only exchange key information in their own language. Fortunately, instead of buying a textbook for grammar, we can simply recruit a companion from the indigenous population and appoint them as a translator.

Read more about the languages of virtual worlds in the article: When English is not enough  language experiments in video games.

However, one thing is certain  even if Spiders' work raises some doubts for me, I am convinced that it is worth giving him a chance after the show in Cologne. Maybe our tolerance of technological pitfalls has changed dramatically since Gothic, and we will collectively throw virtual rotten tomatoes at GreedFall. Maybe the world will turn out to be even more uninteresting than giant sandboxes with a million markers in three different flavors. Maybe the plot will loose it's punch at some point, maybe the tactical combat system will not be appealing, maybe even the development system that I praised here so much will actually turn out as shallow my knowlege of quantum physics? And maybe not.

The trip to Cologne and accomodation was covered by Gamepressure.

According to our users, GreedFall for PC was a disappointment - the expectations before the release were higher than the current average user score. Redakcja przyzna³a jej notê 8/10, zachêcamy do lektury recenzji: GreedFall Review - Budget Witcher 3 That Simply Works