Ill admit that Im not especially fond of remakes. Video games evolve very rapidly; releasing games that utilize old ideas disguised in modern graphics will either leave the fans of the original displeased, or force the players to use mechanics that might have been popular a decade ago, but are simply outdated today. Those were precisely my impressions after spending a couple of hours with the first remake of Shadow Warrior (the one from 2013): its a decent FPS, at times providing a lot of fun, but its old-school nature was as entertaining as it was annoying. Thats why I was afraid that the second part would repeat the same mistakes, yet after giving it a try at Flying Wild Hogs studio in Warsaw, Poland, I was reassured that this wouldnt be the case. The one question that still remains, though, is what the fans of the 1997 original will think of this game.

The protagonist is still Lo Wang, but after around an hour I spent with the game, I couldnt help but see it as a Borderlands byproduct of sorts. And by all means, its not an accusation: I had a great time playing Gearbox Softwares shooter, and folks from Flying Wild Hog managed to come up with their own authentic formula, instead of just copying random ideas. We have bigger areas, more complex quests, and tons of items and weapons (that can be further modified). Compared with the linear Shadow Warrior released three years ago, the leap in quality is just massive. At the same time, there are elements that havent been tampered with: the game still draws a lot from Japanese culture, is just absurdly brutal, and focused on charging forward with a spring in our step. 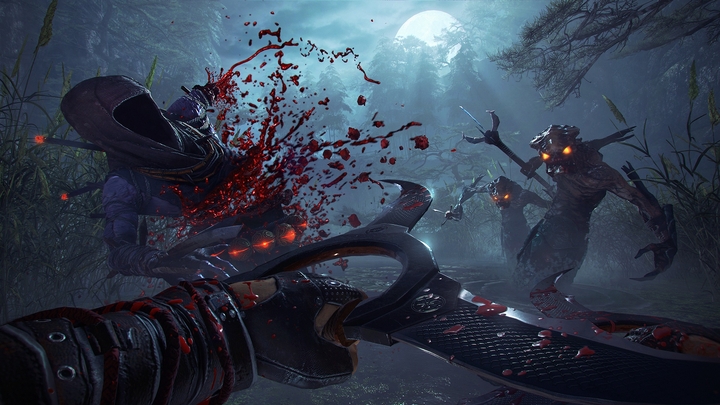 Although the levels are randomized to some extent, theres no shortage of atmospheric locations.

The devs havent forgotten about the humor either, but  as they themselves admit  its going to be less naughty than in the last game. By just a little bit. Although they are not going to push the limits of sexist or racist jokes, we shouldnt expect any sophisticated humor. I initially worried that due to political correctness the game may lose much of its charm, however gutter-like it is. And then I took a look at the night sky in the game, and noticed that one of the constellations was shaped like... a penis. A moment later, I acquired a weapon called Demonic Rod, which was modeled after a big phallus in a manner devoid of any subtlety. Thats hardly elegant, but hey, what could we expect from Shadow Warrior? However, theres also a couple of punchy jokes addressing pop culture; after one in particular, I laughed so hard that I needed to pause the game.

The events take place half a decade after those of the first game, where Lo Wangs mission was to save the world from demons, but he delivered only partially... so people just learned to coexist with the deadly entities from another dimension, and Lo works for the Yakuza. Obviously, not everyone thinks they ought to be thankful for that, so there will be no shortage of enemies to dispose of. Lo Wang will also get a new companion  a girl named Kamiko, who  much like Hoji in the original title  will inhabit his body.

However, thats just the background to the gameplay which underwent some serious changes in the second installment. Close combat is now much more fluid and overall better. Lo has several skills that can be developed throughout the game, but even in the beginning it feels like hes quite invincible. Lo can now dash, become invisible, multiply damage or knock down enemies with a powerful thrust. My personal favorite, though, is the ability to cause spikes to protrude from the ground around him, piercing all enemies in the vicinity. The developers promote an aggressive approach: combat is supposed to be fun, and any tactics that youre going to consider will be limited to choosing the right weapon effective against a given enemy. 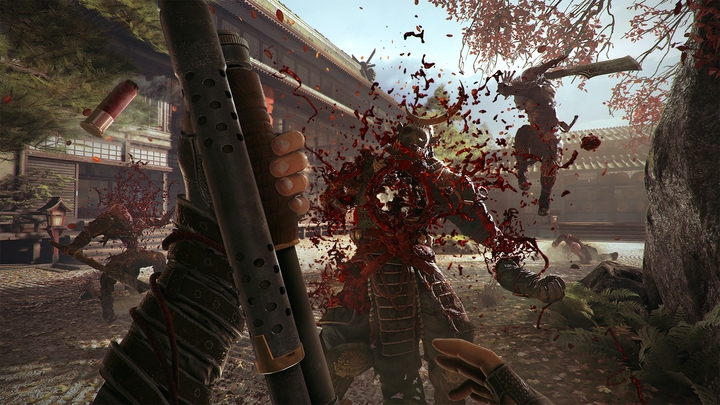 Making a hole in a demon and then shooting another one through that hole? Check!

This can be fairly important, since the enemies can be immune to certain attacks. Trying to take down a fiery boss with a flamethrower is kind of counterproductive; using an ice bow will inflict enormous damage. This means that choosing adequate equipment is going to be essential in killing the toughest bosses. The levels are full of weapons and gems (used for weapon modification), so theres no need to worry that at some point well be stuck because we dont have, say, acid enhancement. 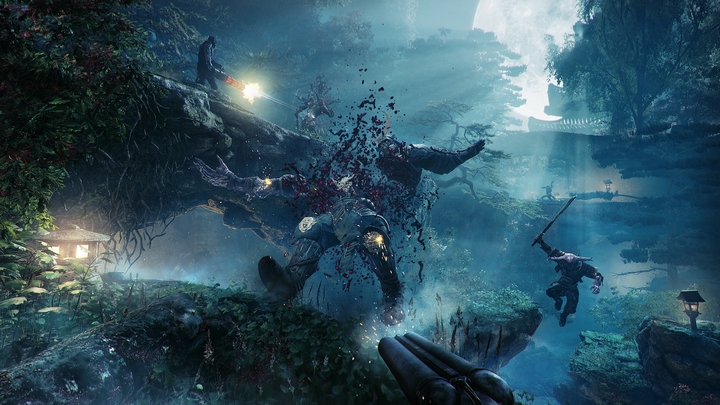 At the same time, the combat is rather thrilling, and the biggest emphasis was placed on using the environment to the players advantage. We can break through walls with the dash, do some serious damage to the furniture with the thrust, and  was there ever any doubt?  detonate hundreds of barrels causing different effects. The enemies are also more diversified: apart from killing thousands of typical demons, there are some really inventive variations of them. Some will split into a couple of smaller abominations after dying, others, more flexible, are able to evade bullets, others still can split into two creatures after receiving a specific amount of damage. Shadow Warrior 2 is also extremely gory; fragments of our enemies are flying around the place, sometimes reaching ridiculous distances. After a couple swings with a katana, guts will remain the only decoration. The violence is so grotesque that it actually adds to the old-school feel of the whole game. All those elements combined constitute a game that can give lots and lots of joy, even if its hardy refined.

Unlike the first part, Shadow Warrior 2 isnt a singleplayer-only game. Flying Wild Hog will implement a co-op mode for a maximum of 4 players  everyone will play as Lo on their computers, while the rest will appear as anonymous ninjas. Naturally, finishing the campaign as a team will be more challenging  expect even bigger hordes of enemies. 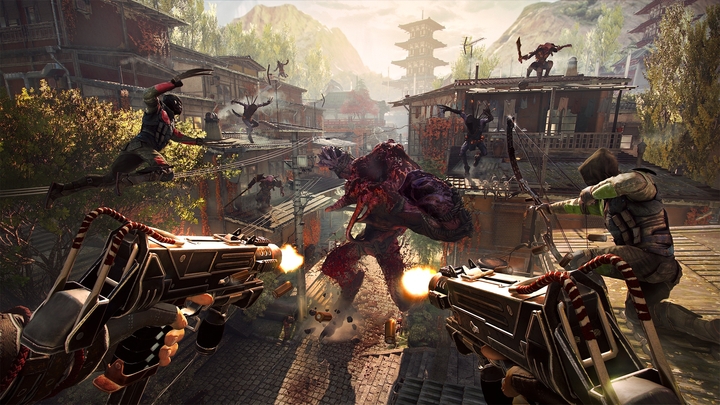 The four-player co-op is a really cool addition  but since its hard to contain the chaos when playing solo, Im wondering how things will look when multiplied by 4...

The combat isnt the only thing that has been improved. A much more noticeable change, in my opinion a positive one, is the open structure of the levels. The 2013 Shadow Warrior was a linear FPS, which offered open levels only once in a while, most of the time not even bothering to create the impression of freedom. This one is a whole different story. Each level is a small sandbox, and while theyre not brimming with content, they are big enough to suck us in for a reasonable amount of time in order to be fully explored. On top of that, Flying Wild Hog have implemented a solution which was mistakenly covered in many articles as procedurally generated levels. In reality, the placement of individual areas and points of interest can vary on the same level  one player can begin the stage in a village in which the other player will finish it. Weather conditions and time of day are also randomized. The players are free to choose the order in which they want to complete their objectives. All these solutions also support the games replayability  levels will be considerably different each time you play the game. 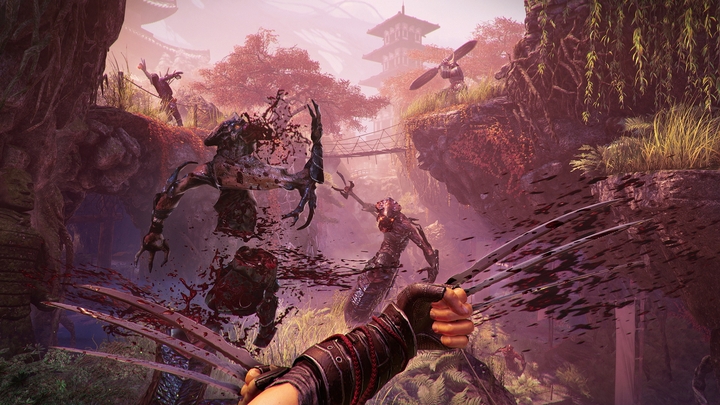 Was Wolverine cast in Shadow Warrior 2?

The location that I got to visit was designed very well too. Depending on the time of day, its appearance changed significantly: at night, I was facing a derelict town, where danger loomed around every corner; during the day, I walked among idyllic gardens full of flowers. The graphics were hugely improved  the lighting being probably the most impressive. Its actually hard to name one element that wasnt significantly improved in Shadow Warrior 2. Personally, I really liked the changes taking this game more towards a looter-shooter  but what will the fans of the 1997 original think? Its hard to tell. But then, contrary to the 2013 remake, this game isnt designed only for the fans of the original. Flying Wild Hog arent simply making a remake, but a proper, much bigger and more ambitious project, and from what Ive seen, theyre actually pulling it off. 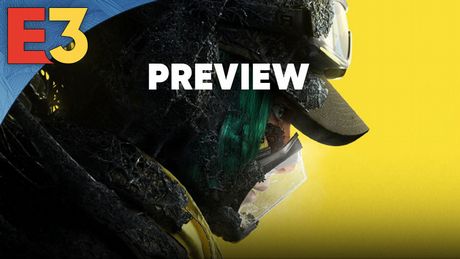