Let's rewind fifteen years. It's May 15, 2005, and the video game industry is holding its breath. At E3 2005, journalists invited from all over the world witness a historical moment. Confident after the huge success of PS2 and the rather unenthusiastic reception of the first launch of the competitive Xbox 360, Sony is proud to present the PlayStation 3.

The nearly two-hour-long conference is mostly filled with speeches from proud CEOs, technological jargon, and slides taken straight from early versions of PowerPoint  a standard at the time, showing how far such event presentations have come over the past decade and a half. This moderately exciting outpour of dry facts is occasionally interrupted by some impressive technology demo (including the famous first trailer of what Final Fantasy VII  it will be another fifteen years before it finally becomes a reality) and a handful of upcoming games trailers. It is the latter that will prove to be the beginning of a wave of failures causing Sony to run into financial trouble and lose its position as a console leader at its own request. 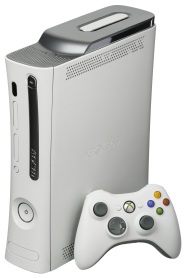 Microsoft showcased their Xbox 360 for the first time on May 12, 2005  three days ahead of Sony. The Redmondbased giant chose an unusual presentation  we could see the console while watching an over 20-minute-long show on MTV. The show was hosted by Elijah Wood, and among the main highlights, there was a "microconcert" by The Killers and an upgrade of the original Xbox by the Pimp My Ride team. At the time, it all seemed strange and exaggerated. In hindsight, though, I must admit that Microsoft quite correctly predicted, or perhaps even defined, the form that later gaming market conferences took. We watch them on streaming platforms instead of TV, but everything else is roughly the same.

As for the games, we could see such titles as Tony Hawk's American Wasteland, Tiger Woods PGA Tour 06, Need for Speed: Most Wanted, Madden NFL 06, Kameo: Elements of Power, Gears of War, Ghost Recon 3 (eventually released as Ghost Recon: Advanced Warfighter), Project Gotham Racing 3, NBA 2K6, Quake 4, Call of Duty 2, The Darkness, Saint's Row, and Perfect Dark Zero. For the most part, however, these were several-seconds-long teasers, and during the final presentation of Perfect Dark Zero, the focus was more on the reactions of the participants than on the game itself. Unlike Sony, Microsoft did not artificially raise expectations and demonstrated mostly actual gameplay footage that didnt seem very impressive. This, combined with an unusual form of presentation, meant that it did not impress players very much. The situation was to change later, and much of it was due to Sony's clumsiness, which effectively redirected players interest to the competition.

Among the games showcased during the 2005 Sony conference, there were Formula One, Gran Turismo, Tekken, Red Dead Redemption (then still as a project without an official name), NiOh, Heavenly Sword, Mobile Suit Gundam, Resistance, as well as Motorstorm and Killzone 2, both visually stunning. It was these last two trailers that became the source of the problems and criticism that fell on Sony in the months that followed. The games mentioned above were mostly presented on prerendered videos  and if the gameplay was demonstrated somewhere, it didn't impress that much.

The videos of Motorstorm and Killzone 2 appeared to be pieces of gameplay  and were stunning. The Killzone 2 trailer is very good even today, and if Sony were to release exactly the same Motorstorm trailer in the coming months, we'd be very impressed with the visuals that the PlayStation 5 provides.

These games, however, didn't actually look that good in the end and they weren't supposed to look like that from the beginning  not on PlayStation 3, at least. In both cases, we were dealing with the so-called target renders  videos made for the creators to present a vision of what they aspire to with a rather unrealistic end result. I could not get to the details of what was going on with the developers of Motorstorm after the trailer was shown, but I do know that the material for Killzone 2 was prepared exclusively for the internal use of Guerilla Games.

Despite this, Sony decided to show it off to the world. That wasn't yet the problem. The problem arose from a lie made by Jack Tretton, then vice president of Sony Computer Entertainment America. He said the sequences on screen were generated in real time.

The fraud was quickly discovered and caused a lot of criticism  it was the first of many failures that forced PS3 to give up some of its market share to Xbox 360 in the first several years after the premiere. And the most affected were the studios working on MotorStorm and Killzone 2, which were unexpectedly put up against the wall. Suddenly, the whole world began to expect they would fulfill the vision presented on the renders. Accomplish a technological miracle.

Some of the errors that made PlayStation 3 lose to Xbox 360 for years: