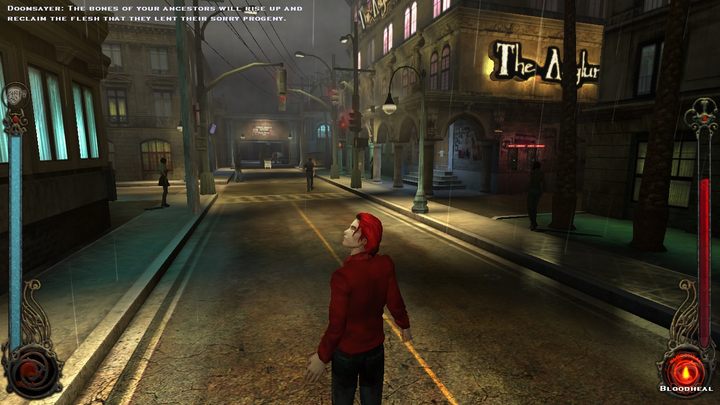 Vampire: The Masquerade – Bloodlines is an absolute champion when it comes to gaming vampires. Not least because it's one of the best RPG games. It's a production that went down in the history of the gaming industry, despite the fact that it was plagued by quite a lot of technical problems at the beginning. The creators hadn't managed to finish their work, the premiere of which was rushed. The studio was also closed shortly after, so they couldn't fix the game, even though more patches were already being developed. Fortunately, devoted fans entered the scene and took care of not only eliminating bugs, but also restoring the content that was prematurely cut.

As a result, we got a brilliant production. One of the things that make them such, is the fact that the choice of class actually matters and strongly influences the course of the game. It gives you a great sense of freedom. Our character's attributes affect how it uses weapons, copes with hand-to-hand combat and more complicated situations, such as opening locks, talking or hacking. This, in turn, determines the course of subsequent tasks, and we can actually talk our way out of most situations in the game. And that's in the camera mode we choose – because we can switch between FPP and TPP here. Therefore, this game is often compared to such outstanding works as Fallout, Morrowind or Deus Ex.

The gameplay is very important here, but the plot, with many memorable characters and situations that fit perfectly into the universe created by Mark Rein-Hagen, turns out to be equally brilliant. It's hard not to be delighted with the fantastically presented threads, memorable dialogues, or the general nature of the story. You just feel that you're dealing with the masters of writing. According to the subject matter, there were also issues related to death and sex, two things that are really close to vampires. Added to this is a great, grimy atmosphere enhanced with a brilliant soundtrack. Rick Shaffer delivered mesmerizing pieces in which we hear many bizarre sounds – as is usually the case in trip hop. Angel by Massive Attack is a strong inspiration for the leitmotif of the game. The soundtrack makes traveling through Los Angeles and other locations even more exciting, especially after entering clubs where we music by Chiasm or Genitorturers.

And all is complete with great graphics (especially with the fan patch!), which was created on the Source engine – the one that powered Half-Lifie 2. The facial expressions that can embarrass some much newer productions are especially impressive. Today, frequent loading screens can be annoying, same as the ending of this game, as it forces certain things in terms of gameplay. It's also difficult to love the combat system, especially the hand-to-hand part of it. These inconveniences are nothing compared to the positive sides of the game, however. Vampire: The Masquerade – Bloodlines is simply a must-play. By the way, it's also worth getting interested in other games from this universe. You will find RPGs, battle royales or even visual novels among them.