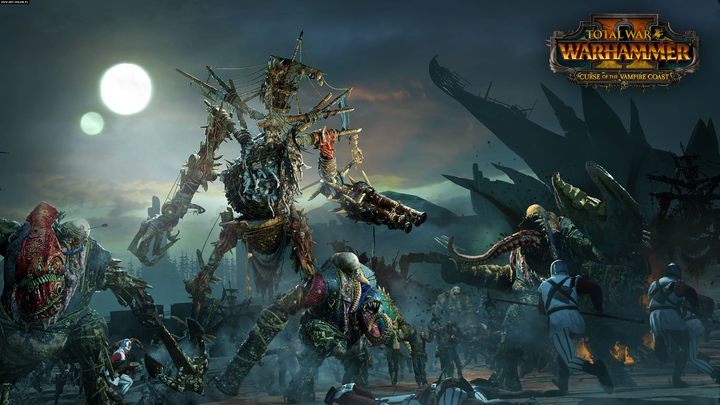 Curse of the Vampire Coast is the second major expansion pack to the highly regarded strategy game Total War: Warhammer 2. The plot tells about the attempted to conquest the eastern coast of Lustria by the immortal Lord Luthor Harkon. He commands a whole army of undead, among which, along with other cursed creatures, are also vampires. However, he is not the only one who wants to loot Lustria. There are also other immortal lords, who also have their own armies doomed to eternal service.

There are four different undead factions to choose from, each of which offers a slightly different gameplay experience. We can guide them in two scenarios, i.e. the Great Vortex and the Mortal Empires. During the campaign, we use the unique skills of the factions, such as expanding the pirate fleet, treasure hunting or gaining privateer fame. Everything in a great gameplay model developed for the needs of the core game itself. Fans of strategy games from the Total War series need no introduction, but new players should also give these games a chance, because they're great productions that can make you fall in love with this genre.

Now, you'd expect naval battles judging by the nature of this expansion, but they're unfortunately nowhere to be found. However, this doesn't prevent us from having a good time. It's one of the top rated DLCs for this huge game. I mean, what could be better than an army of undead pirates?