Today nearly all new games come with a multiplayer mode. An experience that was once reserved exclusively for MMO titles is now a kind of standard that is an eyesore for many old (not necessarily aged) gamers who appreciate the luxury of a quiet and intimate playthrough.

Fortunately for them, current publishers sometimes intentionally and sometimes accidentally release items that, although officially classified as MMO, in practice turn out to be a promised land for fans of solo gaming. These are the games you will find below in our list. Let's get this party going.

In each game we decided to describe a bit here, there is an assessment of its "singleness", as well as a set of the most important features that make it perfect for fans of the single-player experience. 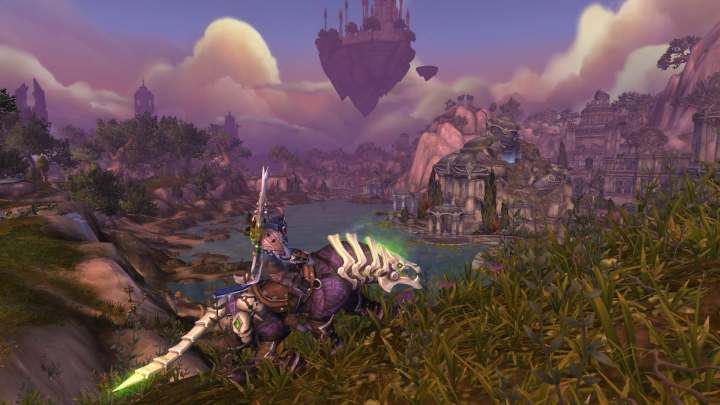 Description: a legend of the MMORPG genre and Blizzard's flagship production, set in the mythical land of Azeroth, better known from the Warcraft series. The story revolves around the back room of the conflict between the Alliance and the Horde. The most popular and most supported game on the market.

The presence of the popular WoW, an MMORPG icon, in our rating may be surprising - after all, this is a game from the golden era of the MMO genre and, as it would seem, the last true representative of the old school. Well, yes and no - the phenomenon and an ongoing streak of success for Blizzard Entertainment lie, among others, in the fact that they can monitor trends in the industry and follow them (often setting new standards). This is the case when it comes to World of Warcraft.

Blizzard's flagship game has undergone a solid face-lifting during the past several years (as evidenced by the community asking to launch vanilla servers)  all this in order to open to a new wave of players who are interested in the MMORPG genre but are not looking for everything hardcore so characteristic for the games of that period. In other words, the developers from Blizzard made an effort to unite the worlds of Sunday gamers and stereotypical teenagers who play for 20 hours a day and live in the basement of their parents' house.

Currently, new players in World of Warcraft are greeted with open arms in the world of Azeroth, primarily by getting a level boost to the maximum (or almost), and a set of items that allow instant start. Then you can just follow the path of the story campaign or click on the party matching button to complete more instances and raids, as part of a network group, in which we see all the players for the first (and, mostly, the last) time in your life. You don't even need to worry about using a voice communicator because solving most problems (with the exception of the highest difficulty levels, which are still reserved for old-school MMORPGs) doesn't require the slightest coordination between participants.

An example from my experience. Not so long ago, when I restarted my adventure with World of Warcraft, I had the opportunity to test the mechanics that are convenient for new players. It takes just a dozen minutes to complete the prologue, including creating a character and going through the tutorials. After a while, we are already after the level boost, properly equipped (a little weaker than when collecting equipment, of course) and ready to reap handfuls from the world of Azeroth. My friend has been playing WoW regularly for many years, and yet, after spending just 2 hours with this game, I was already able to enjoy it with him. This is absolutely unthinkable in the context of old MMO titles - whoever played them knows what I'm talking about, and probably also helped his younger schoolmates playing Tibia to kill a giant spider on the way to Venora.