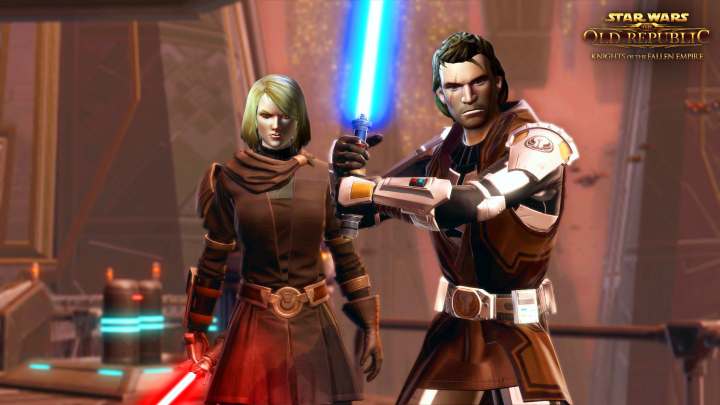 Description: MMORPG set in the Star Wars universe, which takes place approximately 3-4 thousand years before the events known from the legendary movie saga. The plot focuses on the primeval conflict between the Jedi and the Sith and the Galactic Republic and Empire respectively. The flagship feature of the title is an extremely extensive (and multi-threaded) story that we experience together with the lead character.

The strongest asset of Star Wars: The Old Republic is undoubtedly its rich story layer. The universe created by George Lucas is famous for its extremely interesting characters and stories that have long gone beyond the cinematic framework and started to live their own lives. One of these cases is the game by BioWare.

SWTOR is the best MMORPG on the market in terms of the in-game story. Each subsequent update expands the already impressive main storyline, adding new directions and plot twists to it. It is this brilliantly depicted story that makes one feel a bit like with an interactive book or movie when playing Star Wars: The Old Republic  and such a delicacy is best enjoyed alone.

The developers advertise their product promising, in particular, the ability to create your own adventure in the Star Wars universe  the dynamic choices between the light and dark side of the Force and accordingly scaled levels will help you do that. Currently, fans of the Saga can plunge into 9 extensive chapters, each of which offers a different story setting.

When playing Star Wars: The Old Republic, there is no way to get rid of the impression that we are taking part in a one-man show  other players, however, time after time appear on our way, but almost always they only have guest appearances, at the end of which we are again left alone with the story itself.