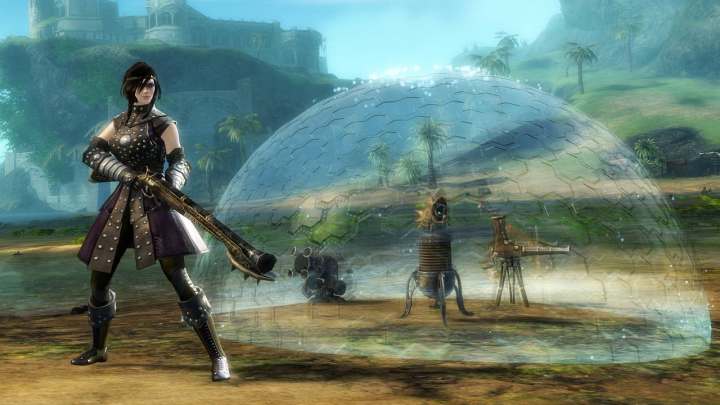 Description: Continuation of the popular game developed by ArenaNet. The game nearly entirely separates the PvP and PvE modes, offering, on the one hand, balanced and equal combat against other players, and at the same time calm exploration of the in-game world (Tyria), filled to the brim with quests and secrets.

Number one on our list is the work of ArenaNet Studio. In Guild Wars 2 players are spoon-fed from the very beginning  when taking their first steps in the world of Tyria, they are immediately welcomed by the comprehensive tutorial that accompanies them in the subsequent stages of the game continuously explaining all the new items and offering solutions to the occurring challenges.

The game, which many consider the most casual product on the market, can be completed solo nearly from the beginning to the end. The main storyline takes players through consecutive areas, where they can calmly complete the challenges that arise. Starting quests doesn't have to be triggered by talking to NPCs. How does this look in practice? Players go from one heart to another, and as soon as they are near any of them, they just tend to certain activities  watering crops, clearing the specified area from opponents, etc. - with one's progress, the heart gradually fills, and when it is filled, players get the appropriate reward and experience - voila!

Sometimes, during their travels, players encounter temporary special events, most often consisting of defeating some stronger (and larger) opponents. Often these are whole chains of quests - players start at point A, complete one task after another to eventually get to point B, where they have to fight the thematic boss. Of course, it might prove difficult to complete such a challenge solo, thus one might consider teaming up with other players. Here the game mechanics come to the rescue - players do not need to officially join any groups or raids to complete the task - they just need to stay close and fight side by side with others. And that's it. It doesn't matter whether there are 5 or 50 players (in larger events) - all of them are rewarded for their participation.

The situation is similar in case of closed instances - just click the button to let the game find the team and take you to a given location. All we have to do is follow the others and do our own thing, namely. eliminate more opponents. Although sometimes there are more complex mechanisms that require minimal cooperation between players, the excellent majority of Guild Wars 2 can be completed without exchanging a single word with other players.