These are the hard times for lovers of physical activity. Access to gyms and pools this year was quite difficult in many places, remote work and sedentary lifestyle that comes with has become even more pronounced. Fortunately, our favorite hobby offers some substitute for gym or outdoor exercise that we can enjoy without too much fuss at home.

Heres a shortlist of the games listed in this article:

Fitness games are booming during the pandemic season, enticing people with the opportunity to stay in shape or lose weight without worrying about the situation outside their apartment door and having fun at the same time. We have selected the most interesting ones.

Compared to sitting in your gaming chair or sinking into the couch, there's no doubt that workout games can do you good and make exercise a lot of fun. But can fitness games provide more tangible benefits, such as weight loss? We decided to check it out.

At the beginning of December, I started regular exercise in workout games. A few times a week (4-6) I do training sessions lasting from 30 to 90 minutes (depending on how much strength and time I have  on average, the length of trainings increased with each week). An essential part of these exercises are sessions with Fitness Boxing, first 20-minute sessions, and currently half-hour sessions, which  in order not to get bored  I supplement with a routine of physical activity in other games from the list. At the same time, the premise of the experiment is that I am changing absolutely nothing in my diet so that any effects will come solely from these workouts.

What are the effects after two months? Well, those hoping for a magical way to shed pounds easily will be disappointed  my weight and belly circumference have hardly changed so far. However, this doesn't mean that the effects are not there at all. In fact, I have noticed a definite improvement when it comes to my condition. Exercises that initially exhausted me very quickly have become routinely easy  some have even become boring and I resort to listening to podcasts. I can also boast a better physique; muscle outlines are starting to appear that weren't visible at all before. My mood has also improved.

So, while at this point, workout games aren't proving to be a miracle method for losing weight for me, I definitely don't feel that the hours and sweat I've put into them have been in vain. In the absence of meaningful alternatives, this is a really good way to get things going. 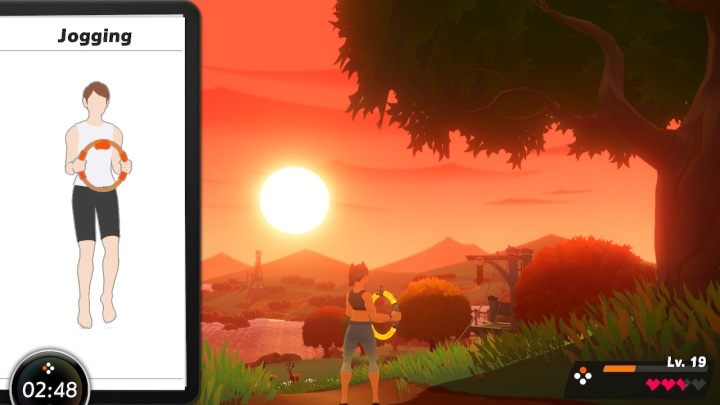 The prices of Ring Fit Adventure can get hefty, but they do reflect some great quality of the fitness experience. When it comes to the amount of content offered by this game, the variety of exercises available or the precision of motion detection, the production outclasses all the competition combined.

The basic idea is coupling movement with a simple RPG. The heart of Ring Fit Adventure is the story campaign, in which, in addition to the main quests, we can do side quests, find new items and armor, fight monsters  and for our actions, we are rewarded with points that yield new levels of experience and skills. The main difference between this game and typical RPGs is mainly the fact that in order to run in its world, we actually have to put our own legs to work and stomp them in place; attacking enemies, on the other hand, is done by doing various exercises (there are dozens of them in the pool).

The accessories included in the set register our movements very precisely  it's hard to either get the game to do something we don't intend to, and conversely, to cheat it into doing something with a half-hearted attempt. A large variety of exercises allows you to work on the widest range of muscles, and the RPG setting effectively encourages continuous playing and makes it that much more fun. Besides the campaign, there are enough additional modes to fill another game with them. The game can even measure your heart rate afterwards! 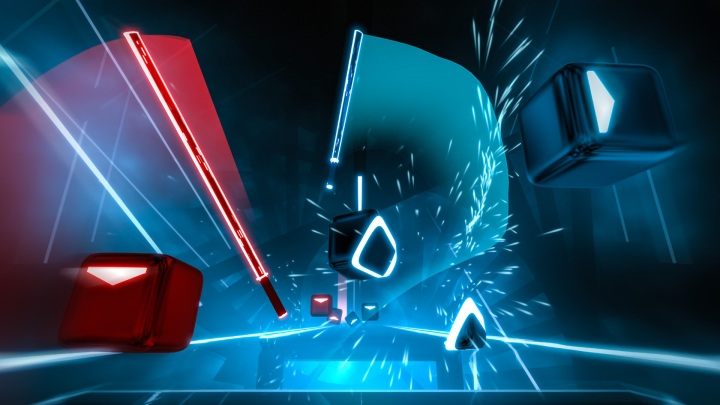 What's better than a lightsaber? Two lightsabers. Beat Saber harnesses all the power of modern VR goggles to realize the ultimate fantasy of every adult kid  commanding the Force, while also helping you to stay fit.

The game takes place in a neon-lit corridor, in which objects to destroy (in two colors) and obstacles are flying towards us. We have to avoid them by moving in the right direction or bending down. The whole thing has to do with what we destroy these objects with  motion controllers held in both hands in virtual reality become full-fledged lightsabers, cutting everything on their way like paper. Power!

We pass each "health path" to the rhythm of various songs, among which there is something for everyone (and more licensed songs can be purchased). The pace of some of them can be deadly and quickly deprive us of stamina, but the satisfaction of setting new records and improving fitness rewards all the hardships. Just like the feeling of wielding the coolest weapon ever created. And with the right amount of training, even the most difficult courses can be turned into a fascinating dance, as proven by youtubers such as Omotea, who couples the game with technology for recording whole-body movements and performs real Jedi tricks. 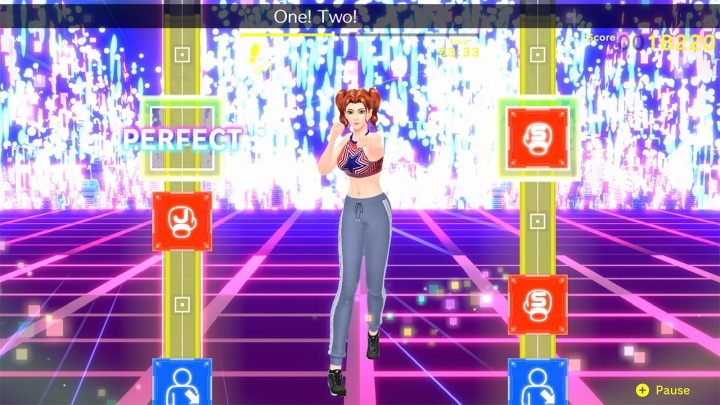 Fitness Boxing 2 is a quite simple, yet very addictive fitness game, in which we have to perform blows displayed on the screen (and, at later stages, also dodges or steps) in designated time frames. Joy-Cons held in the hands are responsible for the detection of our movements, and though they do not work with spectacular precision, you will eventually find they register our efforts quite well with practice (with the exception of side-steps, about which more below).It's reminiscent a bit of the Dance Dance Revolution-style games,except that we work a lot more with our arms than legs.

The daily paths, configured at the beginning of the game, gradually increase the complexity of the challenges, offering satisfying variety and giving you a chance to work up a real sweat. The soundtrack, which consists of 20 diverse songs in instrumental versions isn't bad either  you'll find songs by Steppenwolf, Village People, Bon Jovi, Ed Sheeran and Justin Bieber, among others. Something for everyone, although the option to include traditional performances with vocals is missing.

Although I myself use the first Fitness Boxing, I'd definitely recommend the recently released second installment of this series to beginners. While at first glance, the two are twinned and seem to differ only in cosmetics and soundtrack, in reality, the second game does away with a slew of problems plaguing the original. Thanks to broader configuration options, we can exclude workouts requiring side-steps, which the game has gigantic problem capturing. Believe me, there's nothing more disheartening than seeing your work go in vain (at least in the eyes of the game) because the devs flunked an important element of the mechanics. 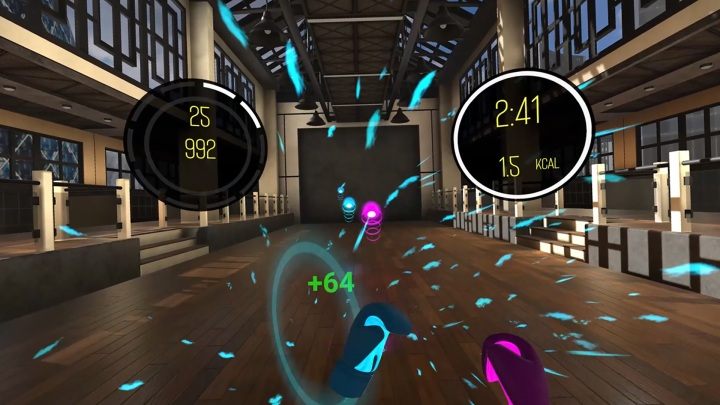 The rules of play in BoxVR are very similar to those of Beat Saber described above  the gameplay consists of smashing objects and avoiding obstacles to the rhythm of various songs, in this game collected by professional fitness coaches and grouped by complexity. The disadvantage of this title is the lack of lightsabers  they are replaced by our fists which, depending on the situation, have to execute right straight, left hook or a punch on the chin.

The advantage of BoxVR is the price  it's much easier to get it at a better price; it's often discounted, and it also got a physical release. Otherwise, the gameplay experience is quite similar, although the game is a bit less polished and sometimes has problems with detecting consecutive moves at high speed.

Boxing is generally a fairly appealing subject for virtual reality, and owners of such hardware have plenty of choices not limited to Beat Saber clones  they can also go for more traditional takes on the popular sport. One of the highest-rated VR boxing games is Rise to Glory based on the movie Creed, in which we grow from zero to hero, taking lessons from Rocky himself. 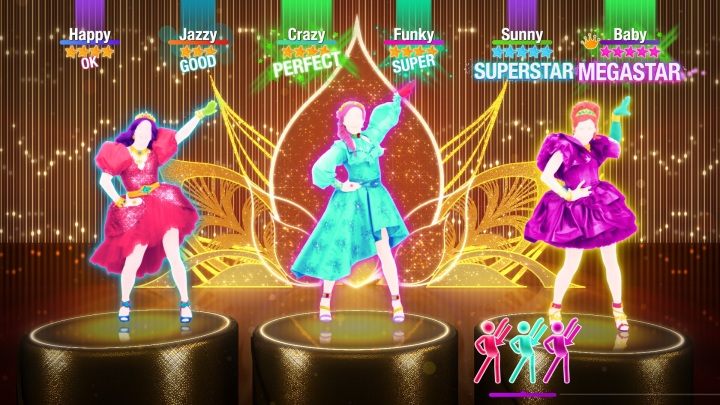 Just Dance 2021 (and earlier installments) is a good option for couples and families who want to get motivated for a little exercise together. The idea of the game is simple  choose one of forty songs available in the game (or a few hundred available as part of a paid subscription toJust Dance Unlimited) and start dancing. The best way is to try to imitate the choreography presented on the screen, but the movement detection is so imprecise (probably on purpose, anyway) that if we get carried away and flow with the rhythm, we can also achieve a pretty good score.

The catalog of songs in each part of the series is quite large, though it consists mainly of the freshest radio hits  if you're not a pop fan, buying a subscription may be a necessity to have fun to your favorite music. The effects of this exercise are unlikely to be as successful as with "traditional" fitness games, but that doesn't mean you won't get tired after completing the entire playlist. Above all, if you like to dance and you hit the right songs, you will spend your time with this game much more pleasantly than with more typical workout games.

You can use motion controllers, Kinect or smartphones to play, depending on your hardware. Although the last option is rather discouraged for a mundane reason  the phone has a tendency to slip out of our hands and shatter. The wristbands that secure the motion controllers come in very handy in this title, not to mention the kinect option to play without having to hold extra accessories in your hands. Personally, I enjoyed using Just Dance as a warm-up before jumping to more challenging games.

ALTERNATIVE  ZUMBA: BURN IT UP!

Switch owners can opt for a similar game, namely Zumba: Burn it Up! instead of Just Dance. The rules are similar, the song selection is less interesting, but this title puts more emphasis on fitness and offers a variety of lessons and "health tracks" focused on achieving specific results. Although personally, I don't know if I could focus seeing those creepy smiles.