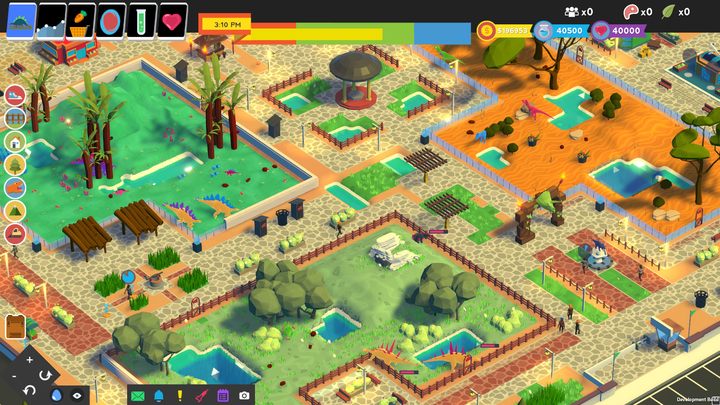 There are several independent sub-genres among tycoons, including games about building a zoo. Parkasaurus fits into this trend, allowing you to create your own Jurassic Park. We have to admit that due to the launch of such titles like Planet Zoo or Jurassic World Evolution it was easy to miss this video game, and it's a pity, because it's definitely worth the attention.

The major objective here is the search for a balance between the needs of our guests and the dinosaurs that are under our care. This is a key to success, because it's the only way to earn maximum profits and at the same time complete tasks which aren't that easy. Dinosaurs have a number of their own needs and requirements, such as the need of keeping certain species in particular biomes. Some animals require privacy, while others have to live in herds. Of course, prehistoric reptiles are not the only species that requires special attention  you also have to constantly attract lots of homo sapiens representatives, in particular, encourage them to visit your park and spend some money. Therefore, you have to regularly keep an eye on the budget and make difficult decisions, for example, which technologies to unlock next or what you should invest in.

The game also offers a number of additional activities, such as the ability to explore your Park in first-person mode or a mini-game consisting in digging out fossils. All this is maintained in a charming and colorful graphics.