You might think it ridiculous. How can you compare a game to a TV series? Even if the two media aren't completely different from each other, they are different types of adaptations, approaching the source material from the opposite directions, in a way. And you'd be right. But I am not going to say CD Projekt RED's Witcher (The Wild Hunt in particular) and the Netflix' TV series are equal in any significant respect, nor will I try to say one is definitely better than the other.

We will only take the example of Mr. Andrzej Sapkowski, who dissects fairy tales and legends to weave parts of them into his stories  we shall lay both adaptations open and compare them in a narrow frame. Which production has better dialogues? Which is funnier? Which conveys the spirit of the books more accurately? Such trifles are what we'll ponder over.

And in order not to be accused of being whimsy, I've asked around the office for opinions on individual topics. We present the results of the survey. As an introduction, we invite you to read and comment.

In case it wasn't obvious  yes, there are spoilers in the text. Be warned

HOW DID WE VOTE? 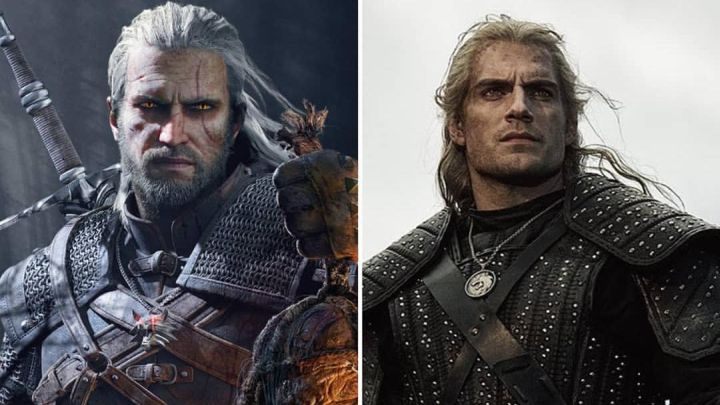 Whose head is Geralt holding, and why does Henry Cavill look worried?

Let's start with the most obvious category, that is, the protagonist. The creation by Henry Cavill is among the series' highlights  the actor makes it clear in almost every scene that he really is a fan of the universe; you also have to respect the effort he made in preparing for the role. Especially when he draws the sword. Cavill finds himself helpless against the limitations of the script, though, so his Geralt is a figure much shallower than the book's  at least after season one. By sharing the screen time with Yennefer and Ciri equally, the Witcher's dilemmas and scruples don't get enough exposition. And the result of that is less than satisfactory.

Geralt from the game has no such problems. He gets 95% of screen time, and he is allowed to talk and talk and talk, so the White Wolf has better chance of revealing his emotions. Another matter, though, is how effectively that was used in the game. Also significant is the fact that, from the very beginning, he is surrounded by people close to him (Vesemir, Triss, Yennefer), with whom he can talk in earnest. In Wild Hunt he turns out a more philosophically inclined hero, with better sense of humor, and capable of uttering more than "Hmm." In short, he's more like Sapkowski's Geralt. The beard bothers me a little.

Almost half of the respondents (47.4%) called it a draw  the other half indicated (although not "definitely") that Geralt from Wild Hunt is better.

Which Geralt is best? (number of voices)