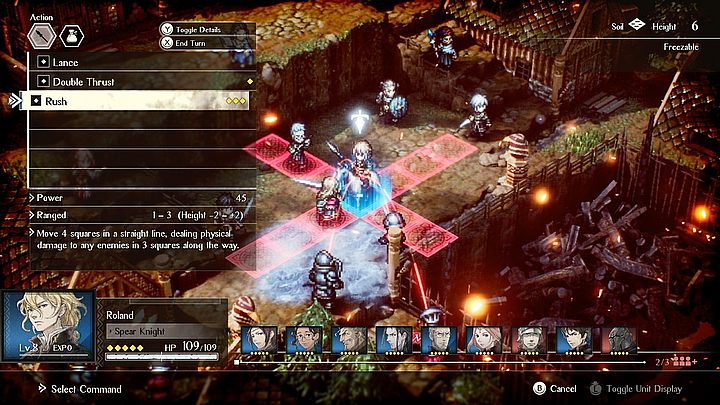 At first glance, the inconspicuous tactical jRPG can win a sympathy of players who mainly prefer Western productions. Why is that? Mostly because of the multi-threaded scenario with political intrigue in a style reminiscent of the best seasons of Game of Thrones. Betrayals, plots and invasions are the bread and butter here – they have to be faced at every step thanks to a lively and epic scenario. Add to that decisions with big consequences in terms of story, and you will get a solid motivation you to keep playing the game.

Triangle Strategy also proves that a well-conceived tactical layer that can be addictive. The bits of story are intertwined with strategic combat, which, despite a calmer pace, arouses a whole range of emotions. Initially, there are not too many clashes, but this changes over time and makes it difficult to tear yourself away from the screen. The game also avoids excessive grind and thanks to good pacing, it will appeal to players who are primarily looking for a political fantasy story.

If you are too young to have witnessed the Final Fantasy Tactics or Tactics Ogre phenomenon, then Triangle Strategy may be the right substitute. Especially since visually, it is not only a beautiful game, but also a very nostalgic one, stylistically referring to the greatest classics. There's a high probability that this title will convince you not only to jRPG, but also to all tactical games. Especially those with significant story elements.