Far Cry Primal for PC is a first-person action game and a spin-off to the sandbox series Far Cry series, created in 2004 year by Crytek studio, later known for the Crysis franchise. From the second part of the series, Far Cry 2, the franchise is in the hands of Ubisoft Montreal, which successively develops the best features of the original. Aside from "main" Far Cry's, from time to time we received spin-offs, like Far Cry 3: Blood Dragon set in science-fiction world. Similarly, Primal strands from the main series and takes us back to completely new, prehistoric settings.

Like all titles in the series, Far Cry Primal was developed by Ubisofts Canadian subsidiary, known from the bestselling Assassins Creed franchise.

Far Cry Primal brings players to the stone age, around 12 thousand years B.C, and takes place in fictional and beautiful yet deadly land of Oros. It was formed thousand years earlier by the glaciers retreating after the last ice age, offering varied landscapes  from verdant forests to swamps and snow-covered areas.

We take the role of a prehistoric hunter named Takkar, whose group wandered on the territory of a different tribe. As a result, all of his kinsmen, with the exception of Trakkar himself, were slauthered. From this moment, the hero is on his own, in a land inhabited by hostile locals and dangerous fauna. Since a lone hunter is an alluring snack for every predator, Takkar's most basic task is to form a new tribe, ensure its safety, and provide it with conditions for development.

In terms of game mechanics, Far Cry Primal on PC, PS4 and XONE offers all the distinctive traits of its predecessors, although due to different setting, each of these traits may be a little different. The game takes place in a vast, open-world environment, offering us not only story missions, but also a lot of optional quests and challenges, hostile outposts to retake, hidden collectibles and dangerous animals to hunt. Similarly to previous Far Crys, the developers concentrated mainly on providing the player with complete freedom of action and many alternative ways of completing the missions. Thanks to that, the game will offer something for fans of action, as well as for those who prefer a more stealthy approach and subtle strategies.

In comparison to previous entries in the series, Far Cry Primal emphasizes the importance of item crafting. In a prehistoric setting, we are forced to create every weapon and other useful accessories from the wide variety of available materials, such as different kinds of rocks, bones, and skins of animals. Players can create various maces, spears, bows, knives, and other primitive weaponry, and fire is an extremely important part of gameplay, having key role not only in survival, but also providing many tactical options (e.g. scaring off wild animals, or guiding them into hostile tribe's settlements). The lack of vehicles is compensated by the possibility of riding various species of animals, allowing you to travel the land of Oros much faster and effectively than on foot.

Unlike previous parts of the series, which offered varied multiplayer options (including co-op), Far Cry Primal wont offer any multiplayer and is developed as a dedicated single player experience.

Released for PC, PS4 and XONE Far Cry Primal was developed on the original and constantly expanded Dunia Engine, used in, for example, Far Cry 4. Because of the fact that the discussed production is the first part developed with PC and eight generation of consoles in mind, the visuals were slightly enhanced.

The Far Cry: Primal guide contains all the necessary information which will allow you to complete the game: mission completion, acquisition of all of the collectible items, village expansion, as well as collecting all of the weapons and animals. 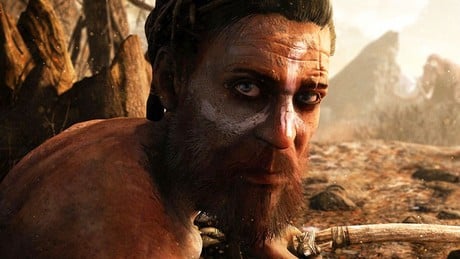 When English is not enough  linguistic experiments in video games

Linguistic aspects are usually the neglected child of building a fictional setting  be it in literature, cinema, or video games. Some developers, however, have decided to take the risk and served us several more or less successful language experiments.

Reportedly, Far Cry Primal is the title of the next installment in the popular FPS series. A picture from the game was posted on the Internet, revealing that the game is going to be set in the prehistoric period.

Far Cry Primal is officially announced as the next installment in the series. The game is set in the Stone Age, putting the players up against new challenges. Far Cry Primal is set for release in Spring 2016.

Far Cry Primal PC specs have been revealed by Ubisoft. The game is going to launch worldwide on February 23rd (PS4/XONE) and March 1st (PC). Before that happens, you may as well watch a new gameplay video.

It seems that recycling is part of Ubisoft's every title. We noticed that Far Cry Primal has a very similar map to the one we know from Far Cry 4, and here's why.