RAGE 2 is a sequel to the first-person shooter developed by id Software and published by Bethesda Softworks in 2011. The new game was made in cooperation with Avalanche Studios (the creators of the Mad Max and Just Cause series).

Similarly to the previous entry in the series, RAGE 2 takes the player on a journey through the post-apocalyptic Earth, ruined by an asteroid. The survivors were forced to live under the tyranny of the Authority led by General Cross. The general is doing whatever he can to kill everyone who comes from Arcs  special vaults in which selected individuals could survive the apocalypse. The players assume the role of Walker  the last Guardian from Vineland. He is trying to stop Cross plans from realization.

RAGE 2 features a vast, open world that consists of deserts known from the previous game, remains of an old civilization, post-apocalyptic cities and settlements, swamps, and jungles. Like in the first RAGE, the map can be traversed on foot or by using various vehicles.

In addition to exploration, the gameplay features elimination of hordes of enemies with a variety of guns. The players can modify their weapons in order to increase their combat potential. Walker can also use special skills provided by implants called the Nanotrites. They enable the protagonist to perform deadly attacks like a ground hit or an energy surge that throws away all nearby adversaries. As the players progress through the game, the protagonist learns how to implement the implants into weapons  after filling a special bar and activating the Overdrive mode the weapon is dealing more damage, it gains new parameters and Walkers health begins to regenerate.

Contrary to the first RAGE, RAGE 2 is powered by Apex technology  the same engine that was used in previous games developed by Avalanche Studios. This enabled the developers to create a true sandbox game without having to worry about the limitations of id Tech engine.

The Rage 2 Guide is a complete walkthrough that will guide you through all the quests. Our Rage 2 maps will help you find the secrets and collectibles. Tips for start will help you choose the best vehicles, nanotrite skills and weapons in the game.

In this set of world news we inform you about the amicable settlement of the Westworld dispute between Bethesda and Behavior Interactive with Warner Bros. Interactive Entertainment, the return of the Half-Life 2 episodes scriptwriter to Valve Software.

The web has been flooded with new footage from RAGE 2. Weve also seen the first reviews of the game. 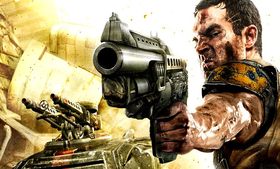 New, 11-minute-long gameplay from RAGE 2 appeared on YouTube. The upcoming title is a post-apocalyptic FPS developed by Avalanche Studios and id Software.

Bethesda revealed the hardware requirements of RAGE 2, a continuation of the postapocalyptic shooter from 2011, which is going to debut on May 14th this year.

Bethesda Softworks has announced that it RAGE 2 has granted the gold status. Thus, we can be sure that the game will be released as planned.

According to critics, Avalanche and id Software have managed to create a pleasant and crazy FPS. Unfortunately, the fun is quite short, and the open world lacks life.

RAGE 2 Novelties and Teaser of Rise of the Ghosts

Later this year RAGE 2 will receive a DLC entitled Rise of the Ghosts. In addition, the id Software and Avalanche Studios teams are working on a number of new novelties that will be released as free updates.