Fans of the classic real-time strategy game Lord of the Rings: The Battle for Middle-earth may have already heard about the BFME: Reforged project. This is a fan attempt to recreate the popular 2004 game on Unreal Engine 4. In February this year we wrote about the presentation of the Isengard faction, which will be one of the available sides of the conflict in this unofficial project (next to Mordor, Angmar, men, elves, goblins, dwarves). Now the time has come for a bit more solid facts. We invite you to watch the eighteen-minute gameplay showing the project in action.

Like the February presentation, the above gameplay focuses on the Isengard faction. We can look at its units - the way they are recruited and their animations. In the case of the latter, it is worth noting that the creators tried to add a collision system, absent in the original. Individual soldiers can now bump into each other, which should not only give the game additional realism, but also affect the gameplay. There was also a presentation of the building system. Unlike the 2004 game, in BFME: Reforged we will be able to build anywhere, not just in designated fields.

The latest recording from BFME: Reforged also shows an interface identical to the one known from the original Battle for Middle-earth, as well as an eye-catching environment. Interestingly, we will be able to observe them not only from bird's eye view, but also from the level of an ordinary soldier. During the game there will be an option to enable a TPP camera attached to a selected warrior and travel through the battlefield in this perspective. 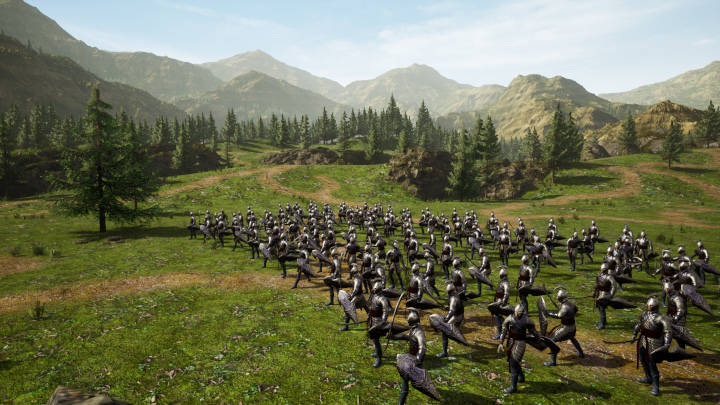 The BFME: Reforged project has been in development for over two years now.

The creators are pointing out that what we can see on the gameplay does not come from the final version of the project. A lot will change - for example, sound effects and music will be added. Soon we should get new information about the progress of work.

Unfortunately, so far it is not known when BFME: Reforged will have its release. According to official plans, it will be preceded by two test phases - a closed beta and an open beta. At this point it is worth noting that first of all the multiplayer mode will be available. The single player campaign will appear a bit later.

If we would like to personally help with the creation of BFME: Reforged, we can apply to the creators by offering our skills. You can find the details here. By clicking on this link, we can support the project financially, although it should be clear that this is not obligatory. The fan remake will be available completely free of charge to all interested parties.

Finally, the question is whether the BFME: Reforged project can be delivered safely, or will it end up being shut down due to copyright infringement? For the time being, the creators are working in peace, and fans of Battle for Middle-earth are certainly keeping their fingers crossed for this to continue.

Apple Patents its Own Game Streaming on 5G