ESRB, the video game age rating body in North America, has rated Assassin's Creed: Valhalla. Ubisoft's work was rated "M (Mature 17+)", and its adult content includes: bloody and violent combat, partial nudity and sexual themes, cursing or hallucinogens and alcohol. While some of these elements have already appeared in the series, others are something completely new. So it's worth taking a closer look at ESRB's detailed summary to get a better idea of how the French developers decided to make their story about Vikings more attractive. 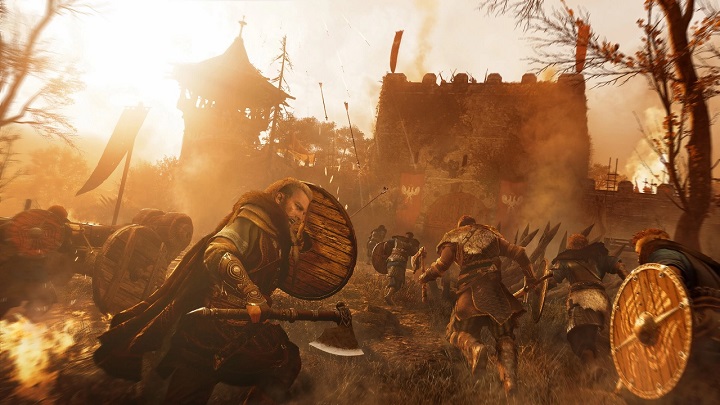 "To battle! And you'd better survive, because I'm not getting smashed alone after this battle is done!"

Let's start with the fact that battles in Assassin's Creed: Valhalla are to be accompanied by "screams of pain and frequent blood splatter effect". Moreover, the game will allow for decapitations, and some of the finishers will be seen on spectacular close-ups showing "bones, organs and muscles of the victims". As we can see, the creators are doing what they can to fulfill their promises to create the most brutal combat system in the history of the franchise.

The game will also not shy away from nudity. A show of its possibilities in this field is apparently a mission taking place in a brothel, where we will see, among other things, "topless women sitting on men". Interestingly, although the game will not lack the possibility of romance, and close acquaintances will be crowned by "laying" (behind ESRB) with a particular character, it seems that we will not see BioWare-like bed scenes; instead, we will only see passionate kisses.

To conclude the adult content, it is worthwhile to mention hallucinogenic substances. If we are exposed to vapors based on suitable fungi Eivor (and thus the player) will experience "distortion and discoloration of the image or impairment of movement". In addition, as we probably know, there will also be drinking contests in the game, followed by our character stumbling, accompanied by a "tilted and fuzzy image".

Assassin's Creed: Valhalla will hit PC, PlayStation 4 and Xbox One on November 17. The title is also heading for PlayStation 5 and Xbox Series X.