Ubisoft has revealed the cards. We finally know for certain that the next Assassin's Creed gets Norse setting. After the first trailer and a handful of details about gameplay and story (as well as the announcement of the official gameplay presentation), the creators revealed plenty about what we will find inside this project.

Assassin's Creed: Valhalla is heading for PC as well as current and next-gen consoles and will launch late this year. Interestingly, thanks to the Smart Delivery option, Xbox One users will receive a free copy of the Xbox Series X version and vice versa. Nice. 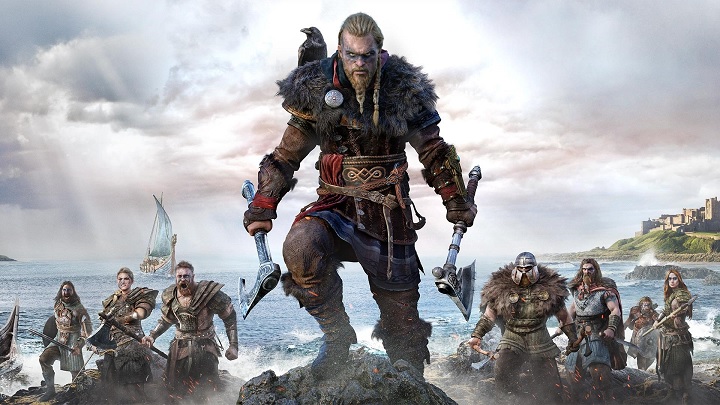 "We come in peace, trust me."
Valhalla means what?

The devs didnt seem to care about going into too much detail about the subtitle. They admitted, however, that Valhalla, the place where glorious Viking warriors go after death, is for obvious reasons very important for the main character (he is a Viking warrior, after all). In time, this is supposed to lead to difficult choices between the protagonists personal ambitions and his clansmen.

The game will be set during the peak of the Viking Age, the year 873, in todays Norway. The expansionist tribes of the north have by that time raided most of the lands overseas like Ireland, Britain, or Poland. However, constant wars and conflicts were also taking toll on the peoples of Scandinavia, which was slowly coming to decline, running low on vital resources, and often pillaged in vengeful assaults. In the midst of all this, we will lead a clan in AC: Valhalla, playing as Eivor, the male or female protagonist (the game will let us to choose the gender). The creators convince that players will Feel the harshness of the lands, the political pressure there at the time. You'll feel all that and hopefully you'll understand why you have to move to England, where most of the game takes place. 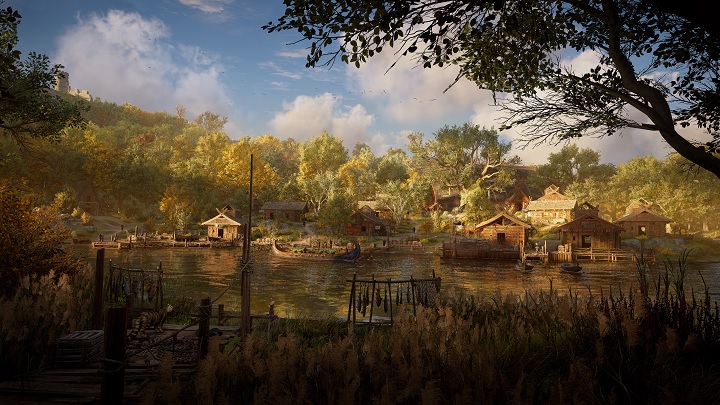 "He came afar in hope to "do", the little town of Dandaloo."

The creators of Assassin's Creed: Valhalla will try to show the Vikings as more than ruthless barbarians. Yes, they were able warriors, but they also developed an extremely rich culture and mythology, and were excellent settlers. The devs dont want to present a lopsided view of history, though, where the Vikings are good and Britons bad. Not all Vikings will act like noble heroes, and King Alfred of Wessex (later known as Alfred the Great) will not be a typical antagonist, but a multidimensional and important historical figure, which the creators want to treat with due respect.

A few more words about expansion and settling. In AC: Valhalla, we will build our clans settlement from scratch and then systematically expand it. We will not only be able to commission new buildings, like barracks, smithies or a tattoo shops, but also to improve existing buildings. This wont, of course, become a strategy game all of the sudden, but we will get a sort of a larger SSV Normandy, iconic starship, home of Commander Shepard from Mass Effect trilogy. The village will therefore be the base of operations, as well as the place where many of our adventures and decisions will begin and end. During the game, we will have to craft alliances with other clans, which will often be sealed by official vows taking place in our village. 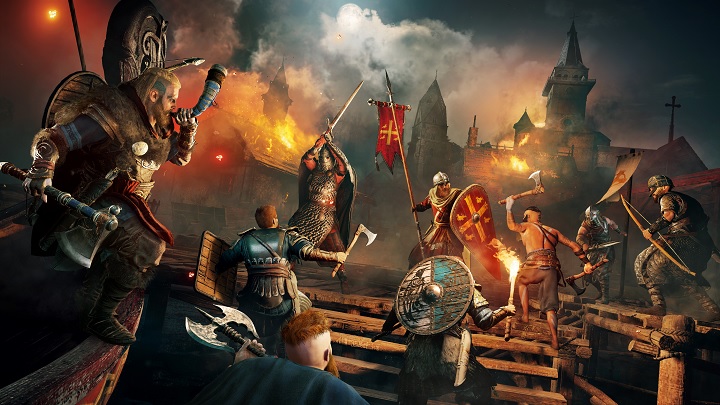 Its not a party until heads roll.

The game world will expectedly be filled with a ton of "interesting things," and discovering them will yield precious rewards. In England, divided into four kingdoms at the time (Wessex, Northumbria, Mercia and East Anglia), we will find three great cities: London, Winchester and Jórvík (todays York). There are also many surprises to be found on the map. Sounds great!

However, the exploration will not only be driven by curiosity or mission objectives, but also by the need to acquire resources and expand one's sphere of influence, which is tantamount to warfare. In addition to raids, launched from our ship in the company of other Vikings, there will be also be sieges, fought on a much larger scale, including attacks on large strongholds. Interestingly, we will be able to hire other players clansmen as mercenaries, or lend our own warriors for money. However, there is no cooperation mode in the game that has been rumored to exist.

And so we move on to the next important element of Assassin's Creed: Valhalla, the combat system which is supposed to be more brutal than ever, with dismemberment being the severe punishment. In addition, Eivor will wield two weapons  swords, axes or... shields that will be used for both defense and attack. According to Thierry Noël, the historian who supervised the project, the creators made an effort to make the combat as varied as possible  as it was in reality. Our opponents are also supposed to be diverse (most diverse in the history of the series in fact).

Stealth mechanics will also be readily available, of course; weve already seen the hidden blade on the trailer, and its interesting how it will be obtained in the game, and why the blade is located on the outer side of the forearm. As we can read on Reddit, one of the Slovakian shops wrote that the game will implement mechanics of camouflage in snow and mud, much like in Ubisofts own Tom Clancy's Ghost Recon: Breakpoint. There will also be a bow, enabling us to eliminate enemies from a safe distance. 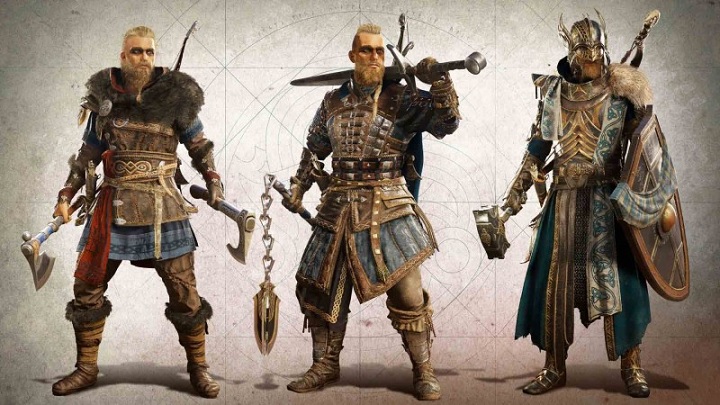 Over time, Eivor will become more and more powerful, which will be reflected in the appearance of their equipment (source: Game Informer).

AC: Valhalla will feature a character progression system. Ashraf Ismail, the creative director of the project, convinces that his team strove to bring many novelties here. First of all, Eivor's combat potential will be increased by acquiring new equipment and improving items with runes. The system will be flexible, and well be able to finish the game with the weapons well have started with, thanks to runes and modifications. Well also be able to acquire new skills and improve those already learned. The creators will enable us to freely choose them those that best suit our style of play. At the same time, the devs dismissed the rumor about a skill tree, at least in terms of functionality of the system they have developed, mainly due to the synergy between individual skills. 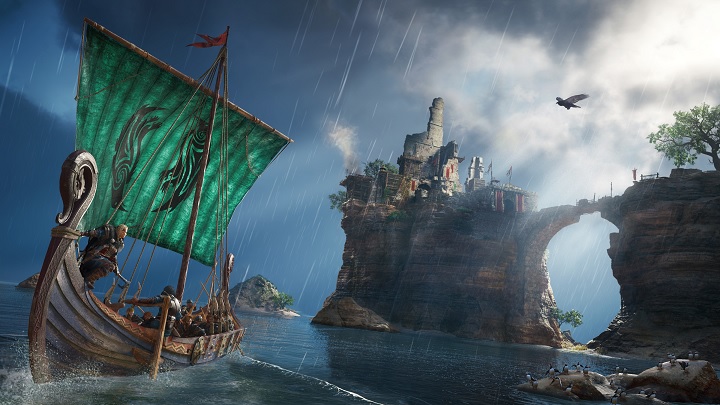 "Dear diary, the weather is awful, but the views"

Since Assassin's Creed: Valhalla is a game about Vikings, we obviously need ships. However, we won't be seeing sea battles like in Assassin's Creed: Odyssey or Assassin's Creed IV: Black Flag. The ship will serve as means of transportation; it will also enable us to disembark quickly if the situation gets out of control. As in previous parts of the series, the ship will be customizable. 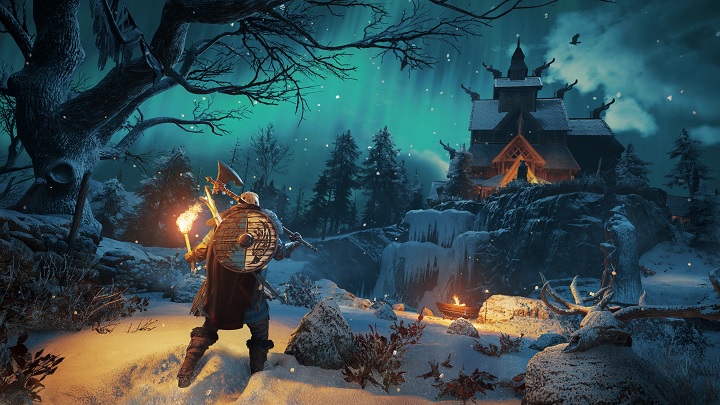 A Viking with a torch, looking at a wooden temple - this night will certainly get interesting.

Since mythology played a central role in the life of Vikings, it will also be one of the pillars of the story in AC: Valhalla. Although the creators do not yet say so explicitly, we assume that a "cool way to integrate it" into the universe of the series means an approach similar to Assassin's Creed: Odyssey. Anyway, we could see a small foretaste of this already in the trailer, in which we see a figure in robes appear briefly on a battlefield, only to turn into a raven, to which Eivor cries Odins with us! The bird that will surely play a similar role to the eagle from the previous entry in the series (the "eyes" of the main character soaring in the air).

Another installment obviously brings another chapter in the eternal feud between The Hidden Ones (Assassins) and the Order of the Ancients (Templars). What's more, we will also learn more about the present-day-timeline protagonist, Layla, as well as the First Civilization. 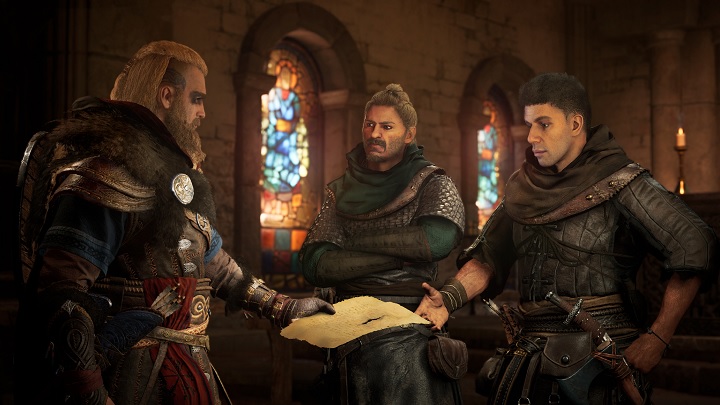 "Diplomacy is important, wars and survival are important, but sometimes you just have to take a break. So: a little party  my place, next Woden.

Assassin's Creed: Valhalla will also offer some side activities that will provide us with a diversion from the hardships of war. The game will include hunting, drinking competitions, as well as "traditional Viking mouth-offs"  contests of throwing insults at the opponents.