The release of Anthem, the latest work by BioWare, was accompanied by reviews that were strictly speaking positive. Suffice to say that at the time of writing this, the average score for this production is 60% according to Metacritic (for the PC version). According to Michael Pachter, a well-known analyst from Wedbush Securities, the reason for this is that Electronic Arts "made a mistake" in allowing the first reviews of this title to be based on the PC version of the game.

As reported by CNBC, Pachter says that due to the ability to fly and maneuver the character in the air, which in his opinion "resembles driving a car", Anthem "is not a PC production"; BioWare's controls "do not work well on the computer", while on the consoles, it's "flawless".

For this reason, Pachter expects the average score for console versions to be around ten points higher than the average for the PC edition; however, Metacritic does not currently have enough reviews to present the results of the PlayStation 4 and Xbox One editions. It should be noted, however, that among the disadvantages of Anthem mentioned by critics, poor controls were generally absent; reviewers pointed out completely different shortcomings, such as the poor storyline, bland tasks and the fact that in the long run, the game becomes repetitive, and thus boring. What's more, the control were often praised, as were the flying mechanics, which give the player a an "Iron Man feel". 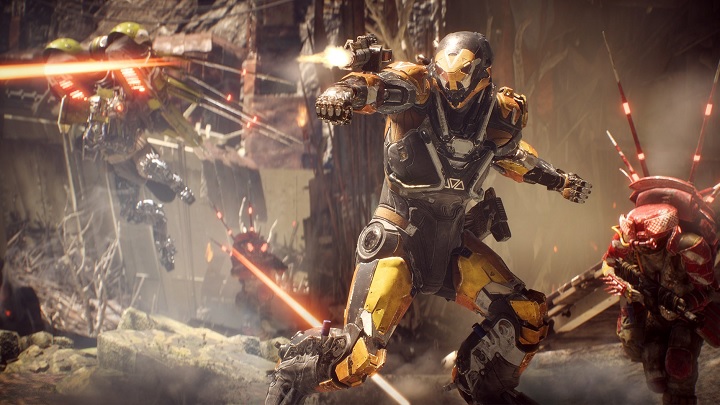 Although Anthem made its debut a few days ago, BioWare employees have no time to rest - not only do they have to improve the game, but also significantly expand it.

And how will all this turmoil affect the financial condition of Electronic Arts? Pachter says that Anthem's poor ratings "fit in well" with the poor results the company has achieved over the past year, although Apex Legends, which is "a phenomenon", is bucking this trend. According to Guilherme Fernandes of Newzoo, "this does not have to be a cause for concern for investors," as they should "bear in mind that not every production will be a record-breaking hit." Besides, as they argue, we must remember that "many EA releases spur extremely popular, annual iterations such as their sports games," even if this is not a 100% guarantee of good results in the future.

Let's recall that Anthem was released on PC, PlayStation 4 and Xbox One on February 22nd. In the coming months, BioWare is going to expand the game, adding events, missions, fortresses, skins and prizes, a detailed list of which can be found here.