Respawn Entertainment has officially revealed Apex Legends – the battle royale game set in the universe of Titanfall. At the same time, the game launched on PC, as well as Xbox One and PlayStation 4 consoles.

The Super Bowl was rich with trailers of such movie and TV hits as Avengers: Endgame, Captain Marvel, The Twilight Zone, Toy Story 4 and Scary Stories to Tell In the Dark.

Microsoft plans to expand Xbox Live support on Android and iOS devices, as well as the Nintendo Switch console.

Respawn Entertainment is to announce a new game today – Apex Legends. According to the first reports, the title will be a free Titanfall spin-off. 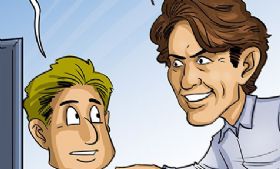 Cartoon Games - Issue #260 - Once Upon A Time In Bethesda

Madmind Studio informed that the total sales of Agony and Agony Unrated on PC have exceeded 90 thousand copiers.

Koch Media, the owner of Deep Silver, has released a message, explaining the decision to publish the PC version of Metro Exodus only through Epic Games Store.