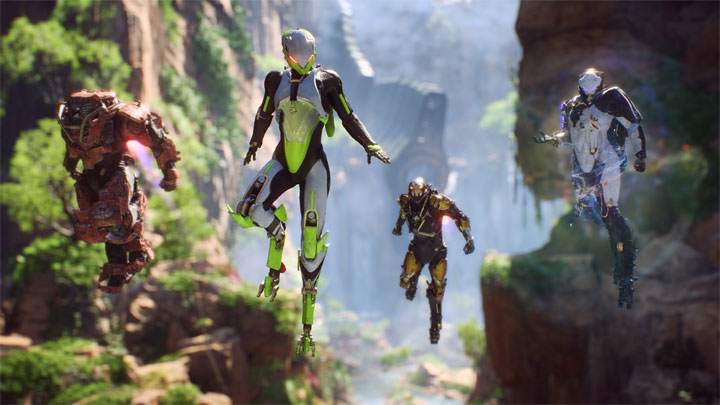 The launch will take place on Friday.
ANTHEM IN A NUTSHELL:

We are still a few days away from the official release of Anthem, but many people, including Origin Access Premier subscribers and journalists, have been playing the title since last week. We'll have to wait some time for full reviews, but a few websites have already published their first impressions, subtly indicating that the production may turn out to be a disappointment.

The game has failed to impress the editor of PC Gamer. While he liked combat, especially in the case of skirmishes, which require close cooperation of players in a multiplayer squad. The problem is what needs to be done between the battles. Anthem intends to set itseld apart from competing productions such as Destiny 2 and Tom Clancy's The Division by its well-developed storyline, typical of a BioWare production, which forces us to make difficult choices on a regular basis. Unfortunately, this aspect of the game turned out bland and lacking originality. According to the article, the city we return to between the missions is static, difficult to navigate and filled with little interesting dialogue.

In general, the whole script seems to be of little interest and the story sequences are mainly an obstacle to waddle through in order to be able to go on a mission again. The game becomes more interesting when we take on quests or freely explore the world behind the city walls. The combat mechanics is praised, and BioWare has kept its promise and greatly improved flight control on PC compared to the demo.

Unfortunately, the game has its fair share of issues as well. According to the PC Gamer's editor, missions are not very diverse and their goals are quickly starting to repeat themselves. In practice, we usually fight waves of enemies, defend a point or collect items. What's more, the loading screens, which appear way too often, are annoying.

Jeff Gerstmann from Giant Bomb agrees with many of these impressions. He also warns that at some point in the campaign the players are forced to spend a few hours on simple challenges, such as resurrection of three companions or finding twenty chests. Without completing these objectives it is impossible to continue the main storyline.

Additionally, many players have problems with the Quickplay option, which is supposed to allow them to quickly jump into action. Unfortunately, after selecting this function, Anthem can throw underdeveloped characters at the last mission of the campaign, where the players are toast before they can even land.

If these first impressions are true, Anthem may not be the great success BioWare is trying to sell us. However, this does not mean that the project is doomed to failure. The foundations of the game seem to be solid, so it all depends on how the creators will develop their work. The reception of Tom Clancy's The Division and Destiny 2 was also initially quite mixed, but the creators managed to turn the tide over time.

Let's remind that Anthem is heading for PC, Xbox One and PlayStation 4. The game will be released on February 22.