This past weekend ResetEra and Reddit have seen a number of posts appear, the authors of which accused Mundfish - the developers of the soon-to-be released Atomic Heart - that it supports Russia over the war in Ukraine. The arguments of Internet users included an analysis of the alleged connotations of members of the development team with the Russian political scene. Some even put forward the thesis that the game's release was deliberately set for February 21, 2023 - and thus almost on the anniversary of the outbreak of the war, which falls on February 24.

In response to these allegations, Mundfish issued a statement on Twitter, in which it asserts its pro-peace approach and focus solely on the game. 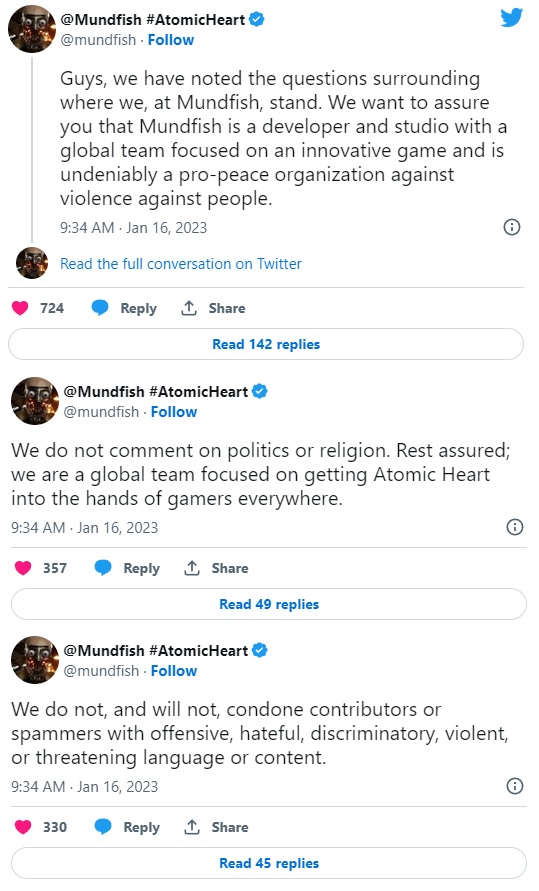 Admittedly, for a message intended to assure the studio's stance on not supporting Russia over the war in Ukraine, the above words sound rather neutral. Perhaps that is why further accusations were made under the quoted tweets.

Slightly more specific statements can be found on the social media of some Mundfish members - e.g. here the Ukrainians are called brothers. On the other hand, on their website the team declares that its headquarters are in Cyprus.

As mentioned earlier, Atomic Heart will be released on February 21, 2023. At launch, the title will be available on PC, PS4, PS5, XOne and XSX/S, as well as in PC/Xbox Game Pass. You can see the game in action here.

Soulslike Runner-ups Have Something New. And It Could be a Huge Success

Does Vermintide 2 Have a Campaign? Story Mode Explained

Watch Dogs Legion - Deluxe vs Standard vs Gold Edition; What to Buy