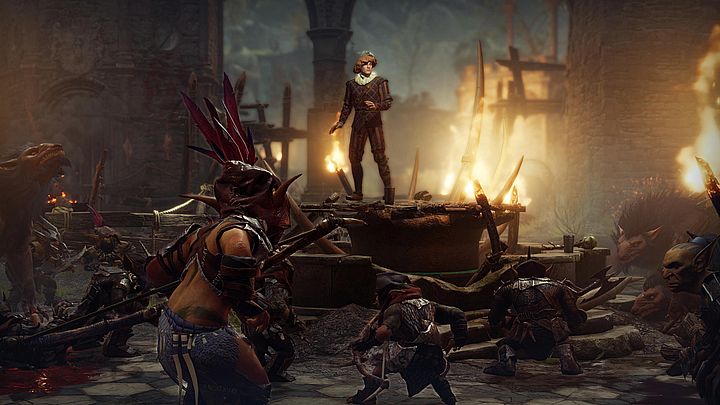 If you squint your eyes, this guy looks like Jaskier.
IN A NUTSHELL:

It's been almost two weeks since the first gameplay from Baldur's Gate III was shown at PAX East 2020. Since then, we have been gradually learning more and more information about the new game from Larian; the team has gained the trust of players, delivering two well received installments of the Divinity series. However, from the first presentations it seems clear that BGIII will differ in atmosphere and combat mechanics from such Original Sin II.

As it turns out, the differences don't end there, as Larian's latest game is supposed to bring the issue of morality and player's choices to a level unprecedented in previous titles from the studio. At least that's what the devs say in the a special message published on their forum. We can read about the great reception of Baldur's Gate III and the new version of the engine. The most interesting words, concern precisely morality, because as we can read in several fragments:

"We always want to make failure as interesting as it possibly can. We don’t put everything that’s cool and interesting behind success [...]

We want to push the limits of every theme within the game, which should allow you to play exactly how you’d like to play. Astarion may be a Vampire Spawn, but that doesn’t mean he has to be evil - if hungry. Though you saw one path at PAX East, there were many possibilities for good, and evil -- note also, everything in between."

The devs also point out that the idea of the studio has always been to develop games that will enable the players to have fun in any way they want. The ever-growing team of developers and new technology will help achieve this goal:

"This larger team, and this new engine, allow us to push this further than ever before. Much further than Divinity: Original Sin 2".

The devs also invite to a Q&A session, which will take place on Reddit on March 12 at 11:00 PT. We still don't know the game's exact release date, but the title is scheduled to be released on Steam as part of early access later, this year. The developers inform that it's supposed to take about 40 hours to complete the main storyline in Baldur's Gate III, but as befits a real RPG, this time may be several times longer if we decide to do all the side tasks and exploration.

Everspace 2 Delayed by... Cyberpunk 2077 and Outriders

Apex Legends - Respawn Confirms That Forge was a Red Herring

Everspace 2 Delayed by... Cyberpunk 2077 and Outriders