Mount and Blade: Bannerlord is an extremely popular game that allows players to become a lord or lady. However, this title is not perfect. Some mechanics are unfinished and others are vaguely explained. In this article, we will talk about battles and commands. Learn the difference between charge vs engage.

Let's start by discussing commands. During battle, you can give orders to your squad. Depending on the needs, you decide the movements of an entire army or a single unit.

Thanks to orders you can loosen the formation so that archers have a harder time, or, on the contrary, narrow it and raise a wall of shields that can handle the projectiles and withstand the enemy's assault. Every battle is different, so think carefully about your moves.

Charge and Engage are two attack options for your troops. In principle, they have the same purpose - to get your troops to the enemy and attack them. Not surprisingly, many players wonder at first what the difference is between the two.

However, by choosing the charge option, you order your troops to advance on the enemy while cancelling previous orders. If, for example, a moment earlier you commanded a troop to raise a shield wall, and then you give the charge order, the squad will abandon its previous formation and throw itself cheerfully at the enemy.

In the case of engage, giving the command will not break formation. Your troops will also head towards the enemy, but it will be a coordinated movement with the spread of units maintained.

The difference between charge vs engage is particularly important for ranged units. If you give them the engage order, then they will keep distance between themselves and the enemy. In the case of charge, they will fire at the enemy but at the same time move towards them, ultimately aiming for melee combat. 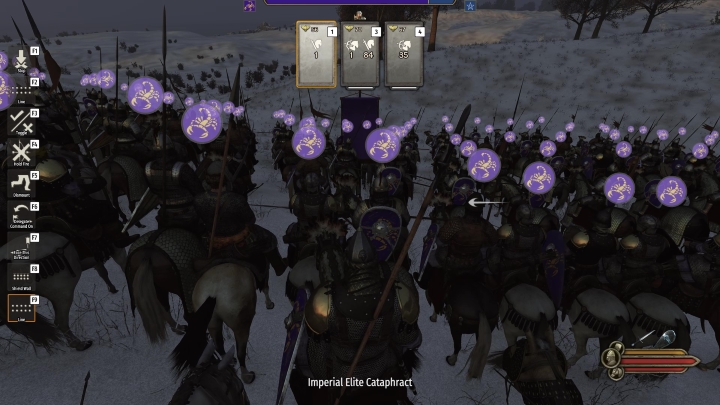 Charge connects with greater momentum. This means that you will inflict more damage on the enemy. Although you should be careful. A disorderly attack on a wall of shields made up of heavy infantry is unlikely to have the desired effect and will combine with heavy losses. Attacking in this way with infantry against mounted archers encircling you is also a last resort.

Egage is used for a coordinated assault. In this way you can engage the enemy infantry while your cavalry is preparing an encirclement. This type of attack will also be effective if you want to close in with your infantry on the group firing at you. In this situation you can order your men to cover themselves with shields.

It is also a good idea to combine both styles of attack. To limit losses from archers, you can use engage, and change the command to charge before colliding with enemies.

Jagged Alliance 3 Devs Have One Job: 'Not Botching It'; New Video