Four days have passed since the release of Biomutant, an action RPG by Experiment 101, so it's worth taking a look at how the project is doing on Steam. The conclusions are quite mixed. The title is quickly losing the players, but at the same time its reception is slowly improving.

Let's start with the latter. At the moment, Biomutant has 5705 user ratings on Steam and 64% of them are positive. The store classifies this as a 'mixed' reception, but a day after the release, only 55% of players expressed favorable opinions about the title. So the project is receiving a better and better reception and it is possible that soon it will reach 70% of positive ratings, which would allow it to change the classification to 'positive'.

The reason for these changes may be the structure of the campaign. Many players and reviewers complain that the first hours are the most boring in the entire game, which is further amplified by the long and extensive tutorial. Biomutant becomes a more pleasant experience, once we get through those initial sections. 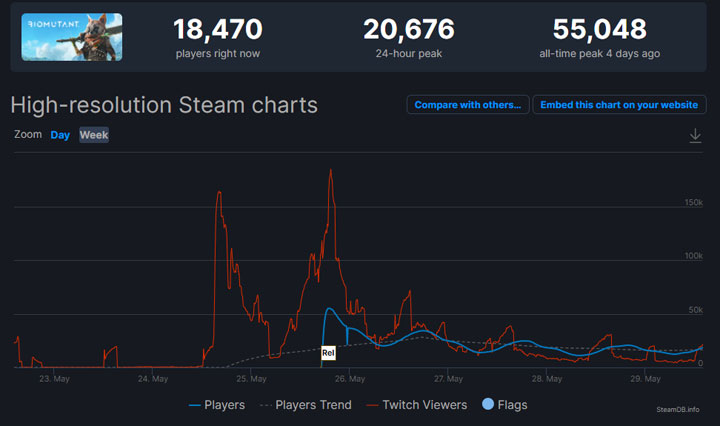 The game does not fare so well in terms of popularity. On release day, the activity record was 55,048 gamers on Steam. Yesterday, the highest score was only 20,676. Single player titles sooner or later almost always lose most players, but in the case of Biomutant the speed of this process is worrying.

However, the game should not be written off just yet. Over the course of the ongoing weekend, it can bounce back. Many games achieve their best results on the first Saturday or Sunday after the release. It is possible that some players waited for free days so that they could peacefully immerse themselves in the world of Biomutant.

It is difficult to assess the game's sales. Currently, it has dropped to number six on Steam's global bestseller list, while on launch day it was in second place. That's not saying much, though, as three of the five currently outselling Biomutant are heavily discounted.

The game was released on May 25, this year on PC, Xbox One, and PlayStation 4. Thanks to backward compatibility, also Xbox Series X/S and PS5 owners will be able to play the game. The devs are planning to release updates that will enable the game to use the power of these consoles, but they will appear only sometime after the release.

Steam Will Make Cheap Purchases via VPN Even Harder