Biomutant, an action RPG by Experiment 101, launched yesterday. A lot of people were waiting for the game, so it's worth checking how its Steam debut went. Unfortunately, the devs have few reasons to be happy.

At the time of writing this news Biomutant has 2354 user reviews and only 55% of them are positive. Steam classifies this as a "mixed" reception. Players complain about a very boring beginning. You have to wait a lot before the game really picks up pace. Many people also criticize the repetitive tasks and annoying narrator.

Mixed reception, however, does not prevent the game from achieving good sales. At the time of writing this news Biomutant occupies first place on the list of global bestsellers on Steam.

It is worth reminding that the project was also popular before the launch. Between May 10-16, Biomutant's pre-orders were the ninth biggest bestseller on Steam, and in the following week they rose to the third place. 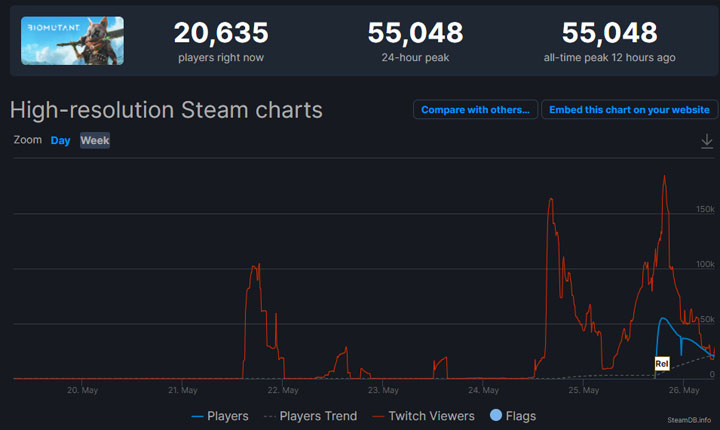 Biomutant is not only selling very well, but despite its problems it's drawing crowds of gamers in front of their monitors. At the hottest moment of the release day, the game was played on Steam by 55 thousand people. This result is twice as high as the activity record of Days Gone, released last week.

The launch of Biomutant was also a big event on Twitch. At the hottest moment of the release day, streams from the game were watched by over 184 thousand viewers.

Games With Gold June 2021 - Injustice: Gods Among Us, Shadows: Awakening and More

First Gameplay From Far Cry 6 to be Revealed on Friday

Wave of Bans Precedes the Launch of The Burning Crusade Classic