Good news for Marvel fans continues. In his podcast Jeff Grubb announced that a game centered on the Black Panther is being developed.

The work is still in the early stages of development, and is being created by a studio headed by former Monolith Productions vice president Kevin Stephens. Project Rainier - as that is the working name of the upcoming game - is expected to offer an open world and a single-player experience. The publisher of the title will be Electronic Arts (via Nibel). 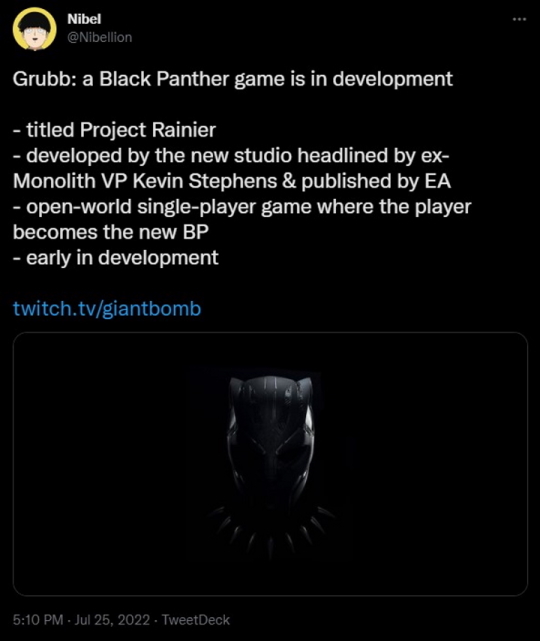 This year's San Diego Comic-Con was packed with attractions for pop culture fans. During the festival, Marvel fans were probably the most spoiled group in the bunch. The House of Ideas panels brought a ton of information about the immediate future of the MCU.

Particular attention was focused on the presentation of the upcoming movie titled Black Panther: Wakanda in My Heart - which is in a way a tribute to the deceased performer of the title role, Chadwick Boseman. As it turns out, the movie, set for release on November 11, 2022, may not be the only project about the comic book hero currently in development..

Well-known industry insider Jeff Grubb used his Twitter to tease Black Panther fans. In a recent post the journalist enigmatically suggested that the character might also get a standalone video game. The leaker did not reveal any additional information about the project, but indicated that we will learn more during the upcoming Giant Bomb Game Mess broadcast, which will be held on Twitch tomorrow, i.e. Tuesday at 11 am PT.

Finally, it is worth mentioning that so far Black Panther has not received his own video game. We can only play the character of the Wakandan hero in Marvel's Avengers. The character was added to the game thanks to an expansion titled War for Wakanda. However, the growing popularity of Black Panther in recent years may have led to the development of a title focused on the adventures of the masked avenger.

Stray Beats God of War, Becomes Best-rated Game of the Year on Steam

Stray Beats God of War, Becomes Best-rated Game of the Year on Steam

Cyberpunk 2077 is a Bestseller in Russia, Despite Not Being Sold