In Overwatch, a popular online shooter based on a system of heroes, we have already had the opportunity to explore a large part of the world. Blizzard has already taken us to England, Russia, Nepal, Greece, the United States, Mexico, Japan, and France. It seems that soon we will also go to Cuba. On the official website of the game, appeared a message stylized for the first page of a newspaper from this country - The Habana Sun. 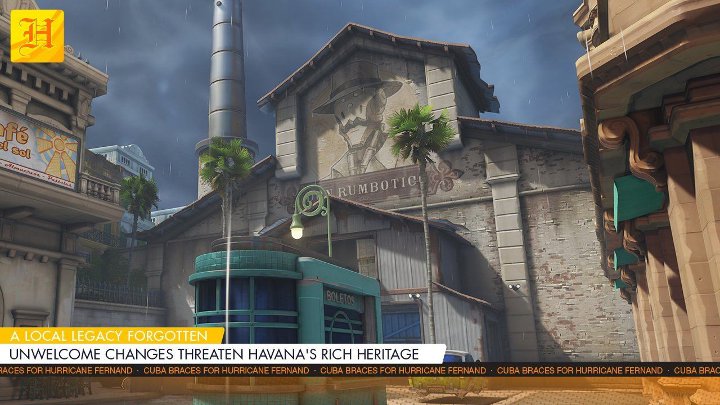 Interesting things are happening in the Overwatch universe's version of Cuba.

There are two articles in the newspaper. The first one tells the story of the Diaz family. They set up a small rum distillery in Cuba and created the Don Rumbotico brand, which has grown in popularity over time. This attracted the attention of a powerful megacorporation that made an offer to buy the company over. The Diaz initially refused, which led to a series of strange accidents, ending with a fire at the distillery. As a result, the family was forced to sell the business for a fraction of its value. The same happened to one of the local tourist attractions - The Havana Sea Fort. The building was completely closed to the public and security guards appeared around it, so it is hard to say what the consortium is preparing there.

The second material tells of the Fernand hurricane, which is about to hit Cuba and cause a lot of damage. The authorities evacuated people living on the coast and issued a warning.

Along with the news, two screens presenting the Don Rumbotico distillery appeared on the web. It seems rather obvious that they are the first look at the next map that is about to appear in Overwatch. However, it is difficult to say what type it will be. It is possible that it will be used for a new event from the Overwatch Archives series, i.e. the PvE mode presenting events from the history of the title organization. It will probably start on 11 April. How do we know? Just look at the weather forecast in the newspaper, according to which the hurricane will arrive next Thursday (Jue is the abbreviation of jueves, i.e. the fourth day of the week in Spanish).

We also have reason to assume that the above teaser presents a new heroine - Alice Diaz, the heir to Don Rumbotico, who definitely doesn't like the actions of the mysterious financial group in Cuba. We should receive confirmation of these speculations soon.

Overwatch debuted in May 2016 on PC, PlayStation 4 and Xbox One and is still being expanded. New content is often announced via ARGs and various easter eggs, so this anouncement wouldn't be out of line.