The video game websites from all over the world had the opportunity to put their hands on RAGE 2, which resulted in an outbreak of video materials showing it in action. The footage shows dynamic battles with opponents (both "common" bandits in bulk quantities, as well as gigantic bosses), brutal races on special tracks and ordinary (well maybe not exactly) traveling around a vast and diverse world. In addition, we got to know the first opinions on how to actually play this new RAGE. It seems like we have a solid open-world shooter on our hands, but ine that does not bring a revolution.

Let's start with the fact that the developers undoubtedly succeeded in depicting fast-paced and bloody battles. The arsenal at our disposal packs an appropriate "punch", and shooting mechanics evoke associations with the latest DOOM. Complementing the various guns are the hero's spectacular skills; with their help, the developer tries to encourage the players to come out of their cover and shoot their enemies at point blank. The aforementioned boss battles seem to be rather standard  the bosses have weak points, which should be exploited in order to put them down.

You may like the "crazy" roster of characters, each of which is unique (for example, the guy who organizes races  a meat lover, who holds a well-done chicken leg dangerously close to the progatonists face during theie conversation); nevertheless, they do not rise above the "post-apocalyptic" standard. 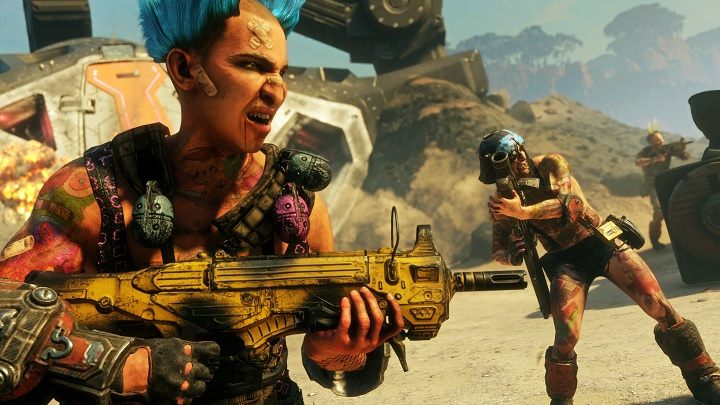 A good gun is the best friend a post-apocalyptic protagonist can have.

RAGE 2 is not only about gunfights, but also about vehicles. Unfortunately, this second aspect of the game does not look exactly as it should, because the driving model resembles that of the Borderlands series (with all its drawbacks). However, a set of wheels is not everything, because during the game we will also have the opportunity to fly over the wastelands. And speaking of wastelands  these seem to live their own lives here, and when engaging in various activities, the players will get the feeling that they are less than welcome; nevertheless, nobody is here to spoil our fun.

While watching the posted videos, it is impossible not to pay attention to the variety of locations at our disposal. Although there is no shortage of typical post-apocalyptic landmarks covered with sand, this time we will also find ourselves in a tropical forest or in picturesque green plains. It is worth noting, however, that we will rarely be able to enjoy the silence  things will get loud more often than not (regardless of whether the noise will be coming from rifles or roaring engines).

Let's quickly remind that RAGE 2 debuted on PC, PlayStation 4 and Xbox One, and will be released on May 14. The title will be the result of cooperation between id Software (the authors of the first part of the cycle) and the team at Avalanche Studios.