Release date of Call of Duty: Modern Warfare 2 was set for October 28, 2022. However, everything indicates that about two months earlier, specifically on August 15, there will be an opportunity to check out the upcoming shooter from Infinity Ward. We are talking, of course, about the early access to the game's beta tests - all the people who pre-ordered the game will be able to take part in them.

The information appeared - most likely by mistake - on the game's product card on Amazon. It was picked up by Twitter user Rebs Gaming. According to the information posted on the official website of Call of Duty: Modern Warfare 2, testing will last at least two days and will take place on all platforms - PC (Steam and Battle.net), PS4, PS5, XOne and XSX/S. 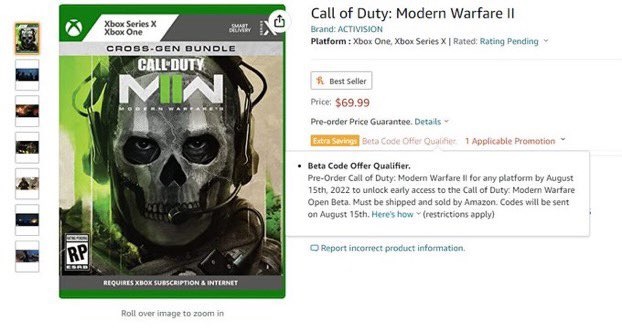 Early access to Call of Duty: Modern Warfare 2 beta tests - how to get it?

It is worth noting that the number of early access codes for the beta is limited, and in the case of consoles, participation in the multiplayer game may require prior purchase of a network subscription (PS Plus or Xbox Live Gold). Also, if you purchase the game digitally, you will get access to the tests automatically. However, if you pre-order a physical copy in a participating store, you will need to activate a 13-character code that you will find on your receipt or attached to your electronic bill. You can do this on here.

Importantly, open beta tests are also scheduled to take place at a later date - although it is not yet known in which regions these are planned. Prior purchase of the game will not be necessary to participate in them. When joining the closed or open beta tests of Call of Duty: Modern Warfare 2, you should be aware that any progress made during the beta test will not be carried over to the 1.0 version of the game.