A few days ago, the first speculations about Call of Duty Warzone 2, the sequel to the popular 2020 free-to-play shooter, appeared online. We took these reports seriously, as they came from Tom Henderson, who in recent years has become known as a reliable source of leaks regarding CoD. Now he has shared new information, which gives a better idea about Activision Blizzard's plans for this project. They are supposed to be quite open-ended, since there is still a lot of time left until the release of the sequel, and the publisher does not yet know what the market situation will be at the end of this year and in 2023.

Call of Duty: Warzone 2 is a full reboot, almost nothing will be carried over from the first part

According to Henderson, Call of Duty: Warzone 2 is being treated as an entirely new entry. Within it, everything will start from scratch. This means that no weapons, characters or maps from the first installment will be carried over into the game.

Instead, moving player stats and some visual elements is being considered, but no final decisions have been made on this yet.

The game is expected to launch with a new map created by Infinity Ward, which suggests links to this year's Call of Duty: Modern Warfare 2, which the team is working on. There are many indications that this map was originally slated to arrive later this year in the first CoD: Warzone but some time ago the plans changed and instead of the constant development of the first game it was decided to develop a sequel. 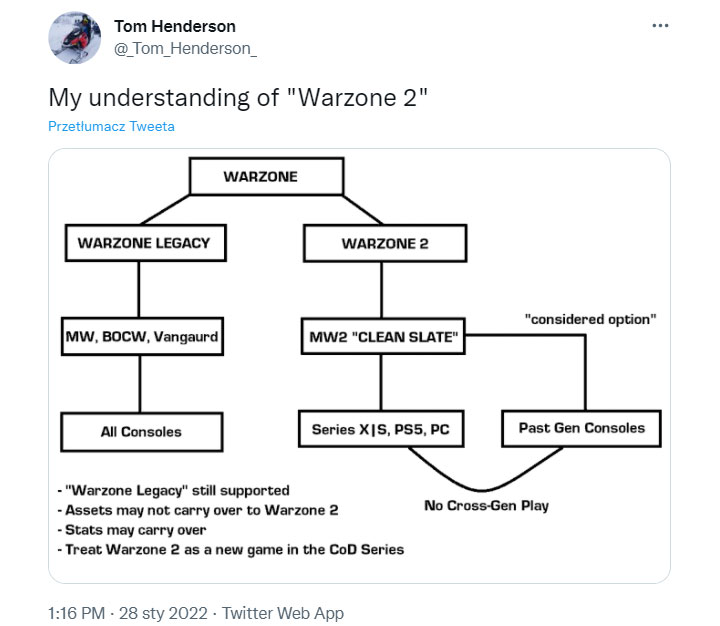 One of the main reasons why it was decided to develop Warzone 2 is the desire to break with the limitations imposed by the old consoles. However, Xbox One and PlayStation 4 still have many users, so the first Call of Duty: Warzone will remain active.

This makes sense because, as we mentioned earlier, there are no plans to carry over old weapons, characters and maps into the sequel, so the first game will remain the only incarnation of the free-to-play brand featuring elements of:

This solution will not only enable the publisher to make a clean cut in the sequel, but it will also ensure that those who played the first part will not lose anything they bought and unlocked. Of course, after the launch of CoD: Warzone 2 we're not likely to expect the first one to be developed much further.

The title of the game may not be Call of Duty: Warzone 2

What about Call of Duty: Modern Warfare 2?

This year's installment of the main series is expected to be Call of Duty: Modern Warfare 2. According to Henderson, Activision is still considering whether to release it on Xbox One and PlayStation 4. However, if it does, there will be no cross-play option between those old consoles and the game's main target platforms, namely PC, PlayStation 5 and Xbox Series X/S.

Furthermore, if sales of this game on next-gen consoles are unsatisfactory, Activision will take this as a sign that Call of Duty's fan community is still not large enough on PS5 and XSX, which may result in the adaptation of a map for Warzone 2 (which will be based on Modern Warfare II) to the first Warzone.

If that happens, however, integration into this year's Call of Duty will most likely not resemble what we've seen in the last few installments. CoD: Modern Warfare 2 is supposed to introduce significant changes to the gameplay, especially in terms of the class system and weapon customization mechanics, which could not be easily adapted to the solutions used in the first Warzone.

Among the interesting facts about CoD: Modern Warfare 2 it is worth mentioning that the game is already in the alpha phase. In recent years, no installment of the series has reached this stage so early, which gives us hope that the final product will be very polished.

Blockverse - Minecraft's NFT Project Turned Out to be Scam

Blockverse - Minecraft's NFT Project Turned Out to be Scam