One of the developers from CD Projekt RED, Fabian Mario Döhla, has assured on Twitter that a large part of the problems encountered by reviewers of Cyberpunk 2077 (such as glitches and fps drops) have already been eliminated, and more will be fix by the upcoming day 1 patch. 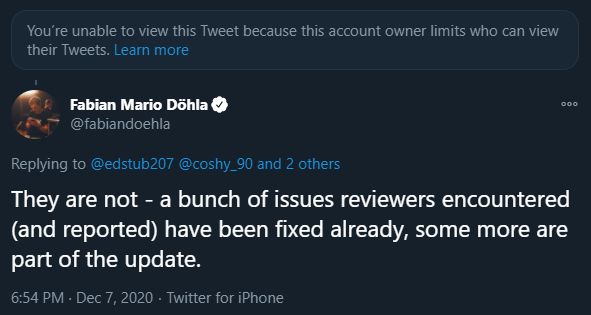 Tweet of Fabian Mario Döhl about the first patch - 1/3.

According to the developer, some of the glitches are caused by problems with content streaming, which occurs when game settings slightly exceed the capabilities of the user's hardware. 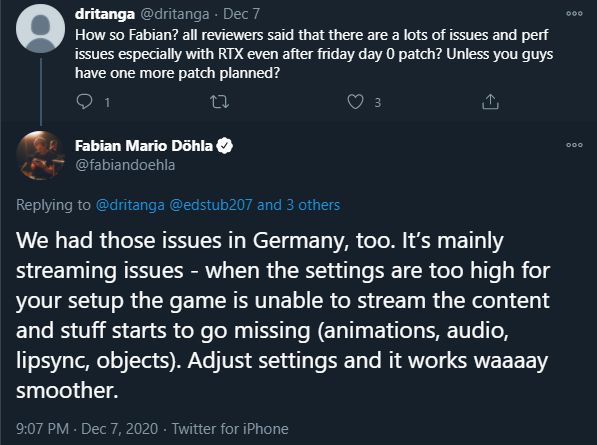 Tweet of Fabian Mario Döhl about the first patch - 2/3.

Polish studio's employee also said that in the case of consoles, the upcoming update will turn Cyberpunk 2077 into a "different game".

It's worth remembering that Fabian Mario Döhla's assurances can be a bit exaggerated - the company obviously wants to present its work in the best possible light. It only remains to be hoped that the day 1 patch really will greatly improve the game's condition, especially since bugs are basically the only serious objection that is repeated in most reviews of Cyberpunk 2077 (also in ours).

God of War Creator Hopes For Game Based on Mandalorian

Minecraft Demolishes Roblox in YT's Most Popular Games of 2020