One Civilization 6 player shared on Reddit a so-called tier list of leaders who may reappear in the next installment of the series. It was created based on observations of the rotation of rulers in previous installments and divides them according to the likelihood of return. However, as Finnedorb admits, he placed a certain leader higher because of the sentiment he has for her.

"To be honest the only reason I put Catherine De Medici so high is because she is my main and I'm clinging on to hope," wrote Finnedorb in response to a comment in the thread. 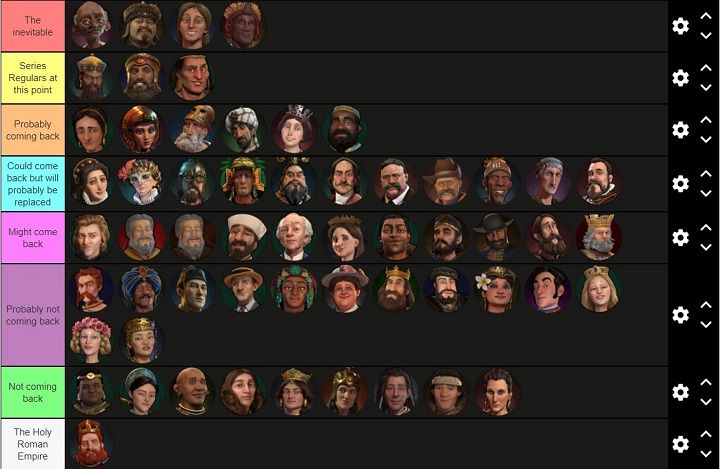 Of course, other users has some questions for Finnedorb, who, among other things, explained why Montezuma was not considered a regular in the series (the information that there were two rulers named Montezuma caused a slight surprise).

watermelon_with_legs: "Why is Montezuma probably going to be replaced? Why isn't he considered a 'series regular'?"

OP: "I meant to put him in probably coming back, I made a mistake. He would be a series regular if the same Montezuma was in every game, In CIV 1 through 4 it's Montezuma II but 5 and 6 had Montezuma I."

In addition, there have been many comments that have sparked discussion about the individual rulers in the game.

"I'd lower Victoria a tier to be honest, not because she's not a good representative for England, but because England has so many memorable rulers that I expect them change things up again. Same thing with Cleopatra who will probably give way to Ramses again, or Hatshepsut, or if we're lucky, Akhenaten," Cressicus-Munch wrote in the thread.

While the possible appearance of some rulers can be discussed, we still don't know when to expect the next installment of Civilization. We can only guess that the work on the game is in progress, because the company has been looking for a scriptwriter for a strategy game and this immediately brings to mind the Civilization series. Nevertheless, these are still just speculations.