Focus Home Interactive has announced Curse of the Dead Gods, a dark roguelike in which we'll be roaming gloomy dungeons, struggling not only against hordes of enemies, but also the title curse that makes the main character weaker... and also stronger (in a sense). The production, which is being developed by the independent studio Passtech Games (creators of such games as Masters of Anima and the Space Run series), will be released on March 3 in Steam Early Access, and is scheduled to leave it before the end of this year.

Below you will find the first trailer of Curse of the Dead Gods and a handful of details revealed by the devs. Although the dark visuals may reszemble the bestseller Darkest Dungeon, the first gameplay suggests that it be closer to what we've recently seen in the warmly welcomed Darksiders Genesis, among others.

In Curse of the Dead Gods, we will play as a daredevil, whose quest for immense riches, eternal life and divine power will lead to cursed temples. We are talking about labyrinths, which not only are full of all kinds of creatures, but also deadly traps and literally dead ends.

During the game, we will acquire progressively more powerful equipment, which in turn will enable us to venture deeper and deeper into the underground. We will send our enemies, including both standard mook cannon fodder and much larger (and stronger) bosses, to hell, making use of both melee (swords and spears) and ranged weapons (like bows and crossbows). In addition, there will be ancient relics at hand, which will also increase our combat potential, providing new skills. As the battles look very dynamic, it will also be necessary to show dexterity and reflexes (for example, to dodge in time). It will be worth remembering that the death of the protagonist is to be associated with the need to start the game again. 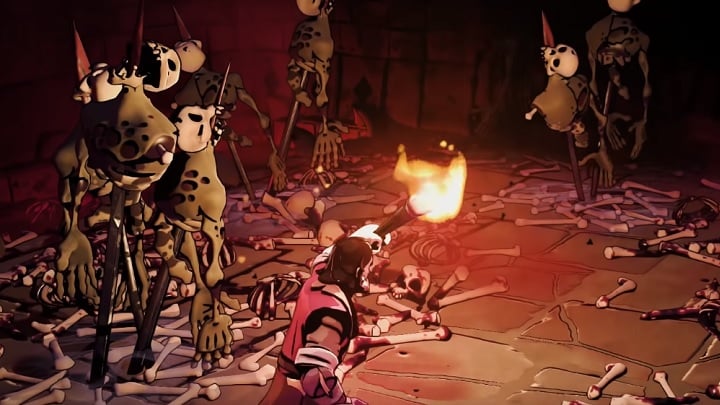 As you can see, some travellers liked the dungeon so much that they decided to stay for longer.

And here we come to what is probably the most interesting element of Curse of the Dead Gods, the eponymous curse. On each adventure, our character will face a different curse that will weaken and strengthen them at the same time. For example, one of the curses will cause some of the damage he receives to take away not health, but gold - although it will keep the character alive longer, they will be unable to collect as much wealth as they has planned. Another curse will cause defeated opponents to explode, injuring all living beings around, both other enemies and the hero.

The developers argue that the Early Access version of the game includes about one third of the content to be present on the day of its release (i.e. at the end of the year, although the devs do not hide the fact that they will not hesitate to delay the official debut if necessary). Over the next months, however, the project is expected to receive a lot of updates introducing not only new elements, but also fixes based on player opinions. As time goes by, Curse of the Dead Gods will feature new temples, equipment and curses, as well as enemies. Moreover, the devs do not exclude the possibility of expanding the list of game modes or mechanics.

Activision is Working on More Remasters

World of Warcraft Doubled its Number of Subscribers