Last Tuesday we wrote about the cover of the deluxe album The World of Cyberpunk 2077, which contained a fragment of the world map of the latest RPG from CD Projekt RED. It caused quite a stir on the web and some Reddit users decided to carefully analyze the presented part of the Night City plan. As a result, they managed to find the most probable places where the action of last and this year's Cyberpunk 2077 presentations took place. 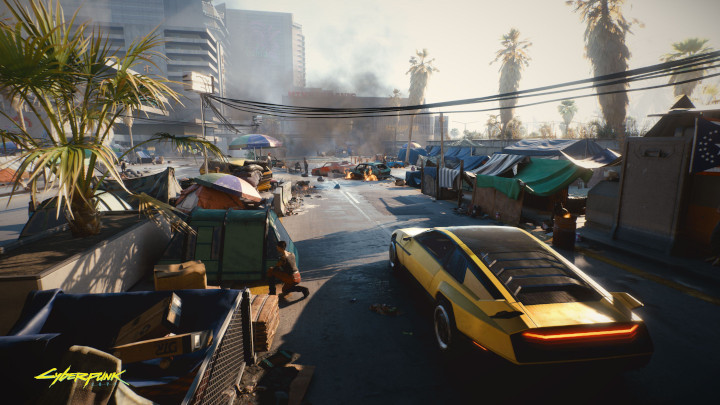 Cyberpunk 2077 should not lack places to visit.

Let's start with a demo from E3 2018. According to Reddit user penywinkle, most of it takes place on the northern edge of the map from the cover of The World of Cyberpunk 2077, in the Watson district, as we can hear on the gameplay. The users managed to locate it using a subway plan from last year's trailer. On the screen below, penywinkle highlighted V's apartment and the hideout of the Maelstrom gang in red. He calculated the route between these two points by analyzing the compass located in the upper part of the screen on the presentation of the game.

As far as this year's Cyberpunk 2077gameplay is concerned, it was the analyzed by user on_ready. As you may remember, it takes place in the Pacifica district, located by the user in the southern part of the map from the album. He marked on it the individual spots from the presentation and the exact time at which we can see them on the gameplay video. The compass also helped him a lot in his analysis.

But wait, there's more. A person named Dog0fWars also compared a fragment of the map from this week with the one in the collector's edition of Cyberpunk 2077 (its trailer can be found here). This enabled us to see more or less what scale we are dealing with.

Of course, it should be remembered that these are only fan analyses, which do not have to be 100% accurate. Everything will be clear on April 16, 2020, when Cyberpunk 2077 launches on PC, PlayStation 4 and Xbox One.

Witchfire - New Gameplay and Behind the Scenes