Last week we learned something more about the contents of special editions of Darksiders Genesis. The priciest among them is Nephilim Edition available for 379,99 euro, in which we can find a board game called Darksiders: The Forbidden Land. THQ Nordic, the publisher of the game in question, has shed some light on the latter.

In Darksiders: The Forbidden Land we'll be able to play with up to five people; while the four participants will play as riders of the Apocalypse and the fifth will take over the duties of the dungeon master. The story of the protagonists traveling the Forbidden Land and their struggle against the Jailer will be revealed during story campaign through which we will be guided by the campaign book included in the set. The whole will be divided into nineteen stages, which in turn form smaller scenarios. Thanks to such a procedure, the game is to be suitable for both shorter games and longer fun. In addition, the devs will give the players a wide field to show off in terms of creating their own levels and scenarios.

The game will take place on a board consisting of thirty-six hexagonal sections. We will use sixty-one figurines, led by those presenting the four main characters - War, Death, Fury and Strife. In addition, one hundred and twenty-four tokens, dice and four hundred and twenty-three cards will be waiting in the box. The latter will be important as they are responsible for character movements, attacking enemies or improving the skills of the controlled hero, so skillful management of the collection will play a key role. 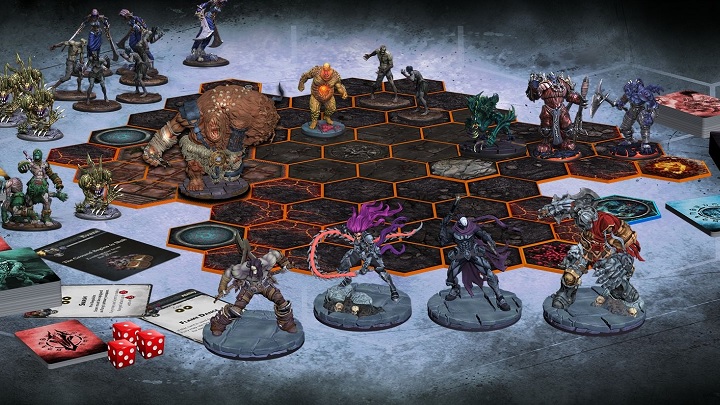 The content of Darksiders: The Forbidden Land is impressive.

Darksiders Genesis is coming to PC (hardware requirements can be found here), PlayStation 4, Xbox One and Nintendo Switch, and will be released later this year.